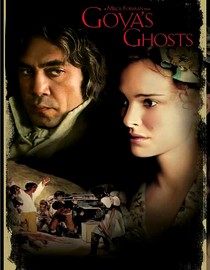 Is it possible  to love and hate a movie at the same time? I think a proper summary of Goya’s Ghosts would be that I enjoyed the watching, but hated that I didn’t much care about any of the people in it.

That’s quite a statement, considering the heavyweight cast. Of course, Javier Bardem plays a great bad guy, but in this film, he sort of rides the fence. I mean, if you’re a baddie trying to do good, then let’s establish that. But it seemed to me that he couldn’t really make up his mind. Incongruity is fine, as long as it’s clearly defined, which it wasn’t here. If the director was going for nuance, I missed it. Head scratcher, and an apparent strikeout for the team of Saul Zaentz and Milos Forman, who produced and directed (respectively) tiny, unimportant films like, oh, Amadeus and One Flew Over the Cuckoo’s Nest.

I am not a Natalie Portman fan, and the fact that she played a double role in this film (mother and daughter) meant that I got to enjoy her twice. No bueno. I could say that she brought some depth to her character, but she played a nice girl from a wealthy family, and she didn’t give me much to go on. I’m still checking into the significance of kissing a dwarf’s feet.  ?????

Loved Stellan Skarsgård as Francisco Goya, the Spanish painter. I must admit that I had no idea Goya was deaf. Shows my art history prowess this day. But his character was the only one who really shouted “Care about me.” Thumbs-up to Barnacle Bill.

Particularly sad was the appearance of Randy Quaid, pre-psychological meltdown. He played Carlos IV of Spain.

And then there’s the part I loved: the photography. Absolutely stunning, and instantly made the film worth watching. I almost forgot about some of the groan-inducing dialogue. I laughed out loud at Matt Brunson’s (Southeastern Film Critics Assn.) review, in which he said the storyline becomes “so silly, you half-expect Mel Brooks to show up reprising his ‘Inquisition’ musical number from History of the World Part I.”

Now maybe if they’d done that, the movie wouldn’t have slapped leather directly to DVD.

On the Rat-O-Meter scale of five cheeses, I give Goya’s Ghosts: