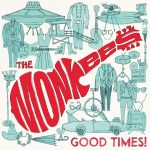 As I write this, I’m listening to the Monkees’ new album. Do you believe that? After 50 years, the Monkees are still relevant (as of today, the album is #1 on Amazon). Stream-of-consciousness reactions:

I deliberately did not read any other reviews of this record until I’d done mine. Surprising how my critique differs so completely from others’. I guess that’s why I teach music instead of criticism. However, I’m willing to wager that many of today’s music critics weren’t even born yet when my sister and I and our friends were listening to Monkees music and watching their TV show religiously every Monday night. I was young, but I had an undeniable connection with them in their famous years. I bought the 45s, and I knew all the words to their songs. As a 4th grader. So there.

My overall impression is that this project was just plain fun for the three surviving Monkees, now all in their 70s; kind of a final bow before they hang it up for good. The voices are still wonderful to listen to, although the songs definitely reflect their individual writers’ famous styles. I like that, actually. It wasn’t formulaic or uninteresting, and besides, you don’t have to love every tune to love the album as a whole. And I do.