As many of you know, I am an ardent fan of Tudor history. Ever since watching The Six Wives of Henry VIII as a 13-year-old, I’ve been fascinated by their ascensions, reigns, and the lasting influence their policies exacted on the western world.

For those who may not know, the whole of Europe was ruled by the Roman Catholic Church until Henry VIII broke ties forever with the Pope by declaring himself Supreme Head of the Church in England (translation: Pope wouldn’t grant him a divorce, so he took his toys and went elsewhere). Think on what might have happened had the rift not taken place: the pilgrims who stepped off the boat at Cape Cod might have been Catholics — which could also mean that there quite possibly would have been no pilgrims. Hmmmm. Ripples in a pond…

Anyway, get to the point. I’ve been carving out some time in my evenings to watch Elizabeth R, the highly-acclaimed 1971 BBC miniseries. Featuring Glenda Jackson as Elizabeth, the second daughter of Henry VIII, it traces her reign (the  longest of all six Tudor monarchs) from 1558-1603. 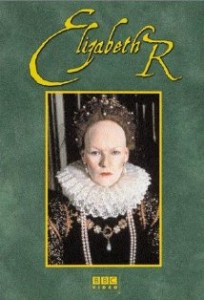 I wanted to watch it because of its high praise for being the most historically accurate portrayal ever of the Virgin Queen (classified as such because she chose not to marry, as opposed to choosing to remain chaste, although there is no real proof that she was or wasn’t). After having viewed four of the six 80-minute plays, I must say I am delighted.

Don’t expect the expected. There are no special effects; no epic jousting or fighting scenes, no zooms on the beheadings, no slash and gore. Save a few outdoor shots of people on horses or traveling a country road, the production could easily transfer to a stage without alteration. The tasty parts are in the acting.

Obviously, this is a one-woman show, so Glenda Jackson bakes, takes and eats the cake. She successfully portrays the inner struggle — yet outer victory — of a woman sworn to be a good and benevolent queen, in spite of having been largely abandoned and neglected by her father and the court as a child. (Her mother was Anne Boleyn, and as we all know, that didn’t end well.)

I found myself transfixed during the long scenes of dialogue. This series is definitely not an amalgamation of  fluffy, pretentious and unintelligible Britspeak. Rather, it’s a riveting, dramatic history lesson for the British people about their own royal line. Fortunately, thanks to syndication and whatnot, the rest of the world gets to learn, too.

So, fellow Anglophiles, bibliophiles, historiophiles, Tudorphiles, and any other philes — don’t miss this. It’s a stimulating, informative and heartbreaking peek into the world of a woman whose reign inspired a great flourish in the arts, literature, science and foreign relations. It’s available streaming on Netflix, so get bizzy.

On the Rat-O-Meter scale of five cheeses, I give Elizabeth R:

OK. Off to get ready for breakfast with Finkville fiend Meg, then a sleepover with the Js. Vacation = good.