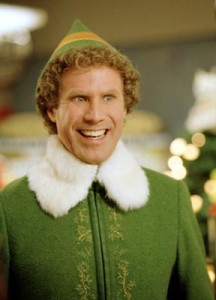 Kids, I tried. Honest I did. I even tried to laugh out loud. Alas, my forced guffaws slid off the couch and died a miserable death on the carpet. I still stand by my (albeit highly personal) assessment:

The best part about the film (and the solitary reason for my not flipping the channel and watching the Texas/Texas A & M game) was James Caan. Of course, Bob Newhart was, well, Bob Newhart. Guy can’t play anyone but himself, which is fine.

But Ferrell. You guys, sheesh. I guess he’s an acquired taste. I insist on this because one does not immediately cotton to a face like his. Well, one might…but I’d question his/her taste in men. Maybe if I saw him play anything other than a bumbling, clueless fool, I’d feel differently. I think what makes an actor really appealing is diverse dimension. Ferrell — at least in the few movies I’ve seen of his — has only one. Gotta hand it to him, though: he’s sure cashed in on that one basic SNL-type character, dropped into a dozen different settings. I’ll bet he doesn’t have a mortgage, and I do, so I’m the big loozer. Somebody likes him, right? Who am I to judge?

It’s not that I can’t enjoy a silly, feel-good holiday comedy, mind. I like brainless funnies like A Christmas Story, How the Grinch Stole Christmas, The Santa Clause and Christmas Vacation. (In fact, The Santa Clause will always be special to me; it’s the last movie I ever saw with my mother.) It’s just…Ferrell. Ew.

Still and all, the story didn’t offend me. But a Christmas “classic” that people watch over and over and over? That’s a head-scratcha.

On the Rat-O-Meter scale of five cheeses, I give Elf:

Now hey — get that holiday shopping finished. I am definitely getting  it all done today. Easy to do when you shop from your office chair.

Also agreed: “Hey… we need a character that is going to sit and be extremely dull, pleasantly awkward, old… so he can be in charge of stuff…, and who everyone knows so there’s a chance they’ll watch this movie in the theatre…? Let’s get Bob Newhart!” “You’re a genius!!!”….

I agree with you on Will Ferrel for the most part. I enjoy Elf, however.

The “funny guy” I can’t handle is Adam Sandler. Jim Carrey is up there too.

Totally with you on the Adam Sandler thing. But the thing about Sandler and Carrey is that they have played other role types in addition to the wise-cracking playboy and the deranged doofus, respectively. Ferrell needs to learn from them.

I have only seen it once, but I think I liked it. Will Farrell is no Tim Heidecker or Eric Wareheim though.

Indeed! And more reviews you shall have, now that I have some free evenings for about 5 weeks. Yay! And happy Hanksgiving!

Thanks and a Merry Hanksgiving to you too!

Aww, Jax, I love that movie

One of our Christmas Traditions is to watch Elf on Christmas Eve, I am kinda sad that you didn’t like it

Oh well you are right though about Will Ferrell, He is okay its just that he plays so outrageous characters it’s hard to believe

That’s all right, Hannah — there are lots of movies to love! I’m sure my choices for “classics” wouldn’t make others’ lists. I’m glad there are tons of films to choose from — even the silly ones at the holidays.