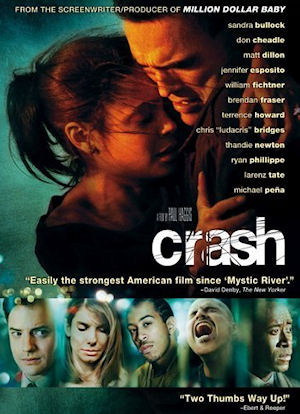 Of the 40 movies that won Best Picture at the Oscars since 1970, I have seen all but five. I decided a few weeks ago to view them before going to work on the previous 40 years. Last night, the list dropped to four when I watched Crash (2004).

I have no recollection of seeing any trailers for this film, and I purposely did not read up on it before watching it. My assumption from the title was that it was another “runaway conveyance” movie like Speed or Unstoppable, or a story about what happens to people who become trapped after a chain-reaction collision on an interstate. Boy, was I wrong.

I rarely throw about labels like “important” or “groundbreaking,” but this film cracks molds from the get-go, and you simply must watch it to appreciate the experience. And the experience is, for the most part, uncomfortable. To say that producer/star Don Cheadle went out on a huge limb with this project is an understatement. It gives “crash” (in this context, indicating people’s lives crashing into one another) a whole new meaning.

Before the story is three minutes old, you’ve already heard two women, involved in a fender bender, screech at each other at the top of their lungs in broad daylight, throwing repeated racial slurs (and all dignity) to the four winds. A Latina girl cruelly mocks the other woman’s Chinese accent, and the Asian woman spits back invective about “wetback Mexicans” (it’s later revealed that the girl is actually of Puerto Rican and Salvadorian descent). It was one of those opening scenes that make you go, Hmmm — I don’t think I like this. But of course, that’s precisely the reaction screenwriter Paul Haggis wants. You squirm, but you can’t stop watching.

From the wealthy LA District Attorney looking for a racial angle to get him reelected, to two thugs on the street looking for their next carjack victim, the racist banter knows no class or boundary. “Whites” are often maligned as the solo leaders in that category, but Haggis blasts that myth. Everyone hates on everyone in this film. No stereotype is left unbattered, so everyone gets hurt. Some more than others. Some, permanently. Black against black, white against white, white against black, black against Asian…I could go on and on. And in almost every scene, people’s deepest prejudices surface in ugly and menacing ways.

Aside from the particularly shocking script (incidentally, if the F-word is a deal breaker, then this isn’t the movie for you), the plot and subplot(s) meld together nicely, and tragically. Heartbreak, death, longing, sadness, happiness, justice, healing and hope combine to bring together a half dozen different situations, funneling into the film’s final statement and semi-satisfying conclusion. Props to Haggis for interweaving the plot lines in such a way that, when the unrelated characters finally meet, you don’t think OK, that was contrived. He never takes the easy way out with the writing. Gotta respect that.

One acting shout-out: Chris “Ludacris” Bridges (I’m going with the hope that he spelled “ludicrous” wrong on purpose) was completely believable — excellent, even — as Anthony, the carjacker. He should have been billed higher. I pried and tried and spied, looking for cracks in his character, but found not a one. Who knows, maybe he was just playing himself. Still, top rate performance.

Watching this movie was work. It’s not a film you enjoy; it’s a film you survive. If you want feel-good, hug-yourself sweetness, watch Pay it Forward. If you want drama with teeth (that bite), rent this. You’ve heard about movies that “take you prisoner” and won’t let go until the final scene. Well, no worries. This one just shoots you in the head, right out the gate.

On the Rat-O-Meter scale of five cheeses, I give Crash:

Wow…sounds very “intense.” May have to put that one in the queue for my iPad on the trip to Barcelona

Great idea! I should get it for my iPad too…oh wait…