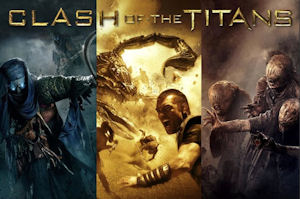 This isn’t as much a review as it is a comparison — and there really is none.

Several nights ago, we watched the new Clash of the Titans, with Liam Neeson as Zeus. Despite all the great CG action and the realistic-looking monsters, it just didn’t compare with the 1981 original (Liam Neeson compared to Sir Laurence Olivier? Who’s more Zeus-like, seriously?). But it neither starts nor ends there.

My main complaint with the new film is the “rushed” feeling. Characters are incomplete; they lack all form of human frailties and characteristics that initially endear. They all appear self-absorbed and shallow — very much unlike the people in the original. Do you remember actually feeling compassion for Calibos, knowing that what happened to him was not his fault? Could you blame him for being bitter? Wasn’t his love for Andromeda painfully obvious; his pain written all over his face? Not so with the Calibos in the new picture. He was heartless and cruel, and his appearance in the film was ancillary at best.

It seemed to me that the director/screenwriters tried to smash too much information into 90 minutes. 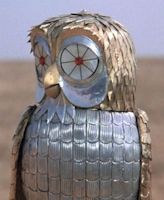 Then there was the ha-ha, wink-nod appearance of Bubo, the mechanical owl, that played such a huge part in the 1981 version. In an early scene, soldiers were perusing the equipment room, gathering weapons to take on their journey. One picked up what appeared to be the *actual* Bubo character, gave it the once-over, then decided it wasn’t important enough to take along. Ha ha.

Again, the niggling (I do love that word) annoyance for me was my waiting for something to make me care about Perseus and Andromeda. Thetis (Calibos’s suffering mother, played wonderfully in the original by Maggie Smith) doesn’t even make an appearance in the movie, which punches a huge hole in the plot:  Zeus’s ultimate selfishness and cruelty, helping the viewer identify with the humans turning against the gods. It’s hard to root for anyone. Blah.

Ray Harryhausen isn’t turning over in his retirement home, but I think he might be twitching a bit.

On the Rat-O-Meter scale of five cheeses, I give the 2010 version of Clash of the Titans:

I’m with you…Great CG and action, but the story was TOTAL snoozer & left me wanting to re-watch the original

I have the original on DVD, believe it or not! And it’s way better.