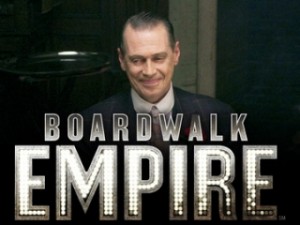 HBO’s much-anticipated replacement, of sorts, for The Sopranos premiered Sunday night, and the Thriller and I watched it. Interesting!

The story revolves around City Treasurer Enoch “Nucky” Thompson and his gang of Atlantic City thugs-in-training, beginning on the night before the 18th Amendment to the US Constitution took effect, banning the manufacture, sale and consumption of alcoholic beverages in America. (A blind fool could have seen what was going to happen afterwards. Have no idea what Congress was thinking.) And boy does it make for a juicy tale.

Seeing as how the series begins in 1920, the people we’d think of as powerful gangsters of yesteryear were in fact still just kids. One such flunky, making small-time deals and running errands for the big wise guys in hopes of getting in on some action was none other than a wide-eyed, 21-year-old Al Capone. 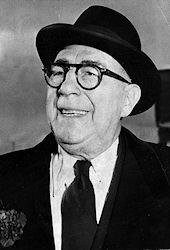 Nucky Johnson
The series is based on a real person and real events. Enoch “Nucky” Johnson was a politician in Atlantic City at the time of Prohibition, and racketeered the gin joints, bordellos and casinos as a way to keep tourism coming to the city during the off-season months — as well as to get really, really, filthy rich. He personified what became known in political circles as “bossism.” He almost singlehandedly ran the city, and was treated like royalty.

In 2002, Nucky’s exploits were meticulously chronicled by judge and historian Nelson Johnson (no relation) in a book. A few years later, producer/director Martin Scorsese came calling, along with co-producer Mark Wahlberg. (Yes, that Mark Wahlberg.) They both thought the “story had legs,” so they procured the rights and started the journey.

The pilot episode was full of what Nucky said every man wanted: booze, women, and slot machines. Along for the ride, of course, comes intrigue, brutal violence and murder — and these were in no short supply in the premiere. The side characters are interesting as well, but the real star is erstwhile supporting actor Steve Buscemi (I loved him in The Big Lebowski, Con Air and Fargo), who plays Nucky with just the right combination of humor, geekiness, compassion and cruelty. It’s a good mix.

Boardwalk Empire airs on Sunday nights at 9, replacing True Blood, which is now on hiatus. It would be cool if they could continue swapping seasons.

Even though it’s not a movie, per se, I will cheese it. On the Rat-O-Meter scale of five cheeses, I give Boardwalk Empire:

Are you going to watch The Event? Saw one of the actors on Jay over the weekend, Someone Ritter (John’s son) and it looked good. A cross between 24 and Lost. Can’t remember when it starts. Just wondering if it will be worth the download space.

Ooo, the trailer looks good — I haven’t even heard of this! Gotta catch up.

PS Hope you have a better day today, lovey! **hugs**