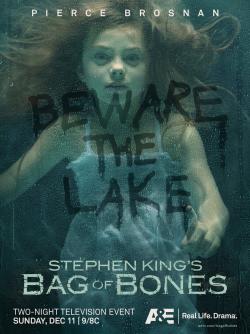 Having read Bag of Bones years ago (1998), I thought the film adaptation would blow me away. Yet, there were little niggling things that just kind of spoiled it for me.

First, the good: the kid who played Ky (seen at left) was fun to watch. A little too much “I’m a kid with a great big smile and not a care in the world” sometimes, but a good little actor, especially when it came to showing fear. Often, child actors show fear in their actions and voices, but not behind their eyes. This girl nailed it.

The jump-out-and-scare-you moments were well done. The ooky factor (like, when magnets moved on the fridge to spell words, and when the main character’s dead wife would “communicate” with him through cell phones and a bell) was tasteful as well. But two things (among others) really bugged the Thriller and me.

1. Pierce Brosnan never made an effort to Americanize his heavy British accent. Why cast him as born and raised in Maine if he can’t pull it off? Matt Frewer (an American, raised in Canada) played Brosnan’s brother, and they no more sounded like siblings than Julie Andrews and me.

2. Just after Brosnan’s wife died, he revealed to his brother that she was pregnant — even though it had long been known that he could not father a child. Frewer immediately looked away, a pained, guilty expression on his face. This was never addressed in the remaining storyline. How could she have been pregnant if Brosnan’s character was sterile? We never found out, and I cannot for the life of me remember how (or even if) it was addressed in the book. Guess I need to read it again.

All in all, it was a decent story. Not something I’d watch over and over, but OK for a post-concert diversion on two separate nights. It was the little things that bugged me; too many loose ends.

On the Rat-O-Meter scale of five cheeses, I give Bag of Bones: