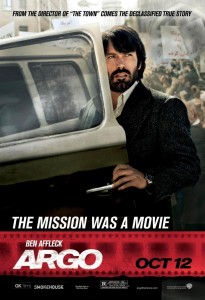 It seems that, after an interesting career thus far (a couple of big hits and a few misses), Ben Affleck has “arrived.” I wouldn’t have used the above descriptors to classify many of his past films, but as good fiend Tom Hanks and I found out: folks can surprise you.

First — let me get this out of the way, as Tom will likely smack himself in the forehead when he reads it: Affleck is dreamy in this movie. Think Serpico, fellow 70s relics. This, from someone who really never thought he was good looking at all. OK, most important detail aside, let’s get to the story.

When I first heard about the film (the true story of how the CIA planned to free the hostages in Iran by sending in an operative posing as a sci-fi filmmaker to smuggle them out), I thought it referred to “those” hostages. You know, the 52 Americans held for 444 days after the deposing of the Shah and the rise to power of Ayatollah Khomeni. What was I thinking? Actually, six Americans escaped that day by bolting out a side entrance and fleeing to the residence of the Canadian ambassador to Iran. This is their story. 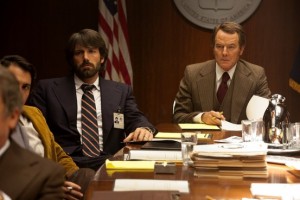 Affleck’s character, a CIA “exfiltrator” named Tony, is given the impossible task of rescuing the six frightened embassy workers before the Iranian Guard find out and parade their executions in the town square, igniting what could be all-out war between the US and Iran. When all “bad ideas” are exhausted by CIA brass (Bryan Cranston is completely convincing as Affleck’s supervisor), Tony offers this last-ditch scheme: pretend they’re filmmakers, in Iran scouting for a new movie location. They do a quick tour of the city, then fly out the next day. With the notion that it’s the “best bad idea” they have, the project gets the green light.

Tony gives them fake identities, passports, backstories and jobs. Their fear of being discovered by extremely crafty Iranian interrogators at checkpoints and the airport is infectious and well-acted by a sextet of people I’ve never heard of. This was part of what Affleck got really right: the authenticity. From the set designs to the costumes to the hair styles — it felt like 1980. No accidental anachronisms, no insincerity or back-handed attempts at caricature (although John Goodman and Alan Arkin were beyond funny as a washed-up makeup artist and has-been Hollywood producer, respectively). At one crucial point, when you think they might have just pulled this off, a member of the fake film crew starts speaking in Farsi to a belligerent policeman — thereby threatening to expose their very fragile cover story. I found myself saying, silently, “No! Stop! You’re blowing up the whole thing!”

Till the last scene, the suspense is uncomfortable, and Affleck builds it slow and painful-like. Superbly acted and photographed, this is a must-see.

On the Rat-O-Meter scale of five cheeses, I give Argo:

You guys will LOVE it!

Great review Fink! I agree with all of that…well I dunno about that Serpico beard stuff (dark haired bearded dudes in the 70’s eh?) haha, but Affleck did surprise me with the level of filmmaking the movie contained. Always a lot of attention to detail. There were a lot of barely noticeable dolly shots…in a good way. You don’t notice them so much as feel them, and I think that takes good taste and restraint that someone this early in their directorial (word?) career rarely has. I still can’t help but feel he is emotionally stilted as an actor. It… Read more »

Thanks, T! The best part about doing these reviews is having seen many of these films with you — my cinema sherpa.