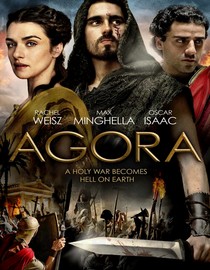 After a really busy Saturday, I collapsed on the sofa and fired up Netflix at 9 p.m., ready to fall asleep to something mundane. Instead, I found Agora from 2009 — a film I’d never heard of, about an Egyptian philosopher I’d never heard of. The most interesting part: she was a she.

Hypatia, in a nutshell, was a highly respected teacher, mathematician, and scholar. She was a scientific thinker who instructed men during an era when no woman ever dared presume to teach a man anything. The film depicts the story of the last decade or so of her life. You can find her on Wikipedia and other sites, but don’t do it if you want to watch the film first (which I recommend).

Of course, the role of Hypatia needed a strong and beautiful interpretation, and it was deftly provided by Rachel Weisz. I didn’t recognize her at first, yikes; her thin, gaunt face really brought out the generous size of her nose. At first, I thought it was a prosthesis. She looks nothing like her Mummy days, but that’s to be expected after a decade. She could have skinnied down for the role as well, I don’t know. Her dewy, pale complexion was one of the only hard-to-swallow visuals. The CG was quite impressive.

The story is rife with religious overtones, mixed with philosophy, history, politics, astronomy and tragedy. Of course, the radical Christians are the bad guys (let’s face it, they often were/are), but in this film, they were attacked first by the pagans, and once provoked, it was on. The enormous Library was eventually sacked, and yet another holy war began.

In places, I was uncomfortable with the story, and with Hypatia, because while her countrymen were slaughtered all around her — including her beloved brotherhood of former students — she worried herself mostly about how the Earth relates to the sun and other planets. As Alexandria fell: Do they move in a circle? Is the Earth the center of the solar system, or is the sun? Is the “circle” really perfect? She seemed incapable of romantic love, although she was adored by many men. Her father (understandably) did not want to see her talents wasted by cooking and washing for a husband, so she never married. Yet, her family owned many slaves. Gotta love the dichotomous life.

The film was gorgeous to look at, and the two leading male characters of Davus and Orestes were dark, handsome and brooding, as is seemingly required. I have not read enough Alexandrian history to comment on the accuracy or inaccuracy of the tale, other than to say the last scene was scripted from the mind of a romantic writer, not historians. But that’s all right. It made for good theater.

I’d say if you’re in the market for an epic period romance/war story, where Christians, Jews and pagans get their stonings and burnings on, this is a good choice.

On the Rat-O-Meter scale of five cheeses, I give Agora:

Wow – sounds interesting! Might have to check into that one. You seem to really enjoy your Netflix – I’m just curious: Do you guys do the Netflix on-demand stuff? Or the DVDs in the mail? Or a little of both? If/when you do on-demand, do you do HD flics, or SD? How is their selection of stuff in HD? Sorry so many questions, but have always been real curious about the service, but didn’t want to go through all the hassles of signing up only to find that it maybe isn’t my/our cup of tea. “Enquiring minds want to… Read more »

I use both the DVDs and streaming, mostly because many titles are only available on DVD.

Regarding the streaming movies — I stream HD through my Samsung Blu-Ray player, and it looks good to me. Even the early 1970s BBC dramas (undoubtedly in SD) look fine. Here’s their list of HD offerings on demand.

I’m pretty sure Netflix still offers their free 30-day trial, where you can test-drive their stuff with no limits on service. You probably already have a Netflix-ready device, so you could dial it in right away. Let me know what you think!

Thanks for the info! There definitely is a “widget” that lets us do Netflix from the TiVo box, so that’s how I was thinking we could do the on-demand stuff.