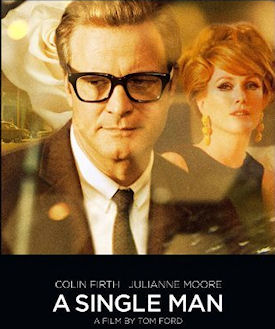 Ever since The King’s Speech, I’ve wanted to get my eyeballs on movies with Colin Firth. I saw a dandy two nights ago.

Painstakingly, brilliantly designed and filmed to achieve total immersion into the year 1962 (think Mad Men), the story grabs you by the throat and shakes you around a bit from the get-go. George Falconer (Firth), a Brit teaching English in Los Angeles, has just been told that his friend (and the love of his life), Jim, was killed in a car crash. He is so completely broken and lost, he decides to get his affairs in order and kill himself.

Many times, in strong lead-character movies like this, the lead runs roughshod over the lesser characters, leaving them grasping for recognition in slim scenes that were obviously written to bolster the headliner. Not so in this film. Julianne Moore, who plays Falconer’s drunken and sad BFF, doesn’t need to overdo it in her limited scenes. She is both beautiful and revolting, clinging desperately to the fond memory of a man she knows she can never have. Does a darn fine British accent, too.

Director Tom Ford allows us to assume that homosexuality in the early 60s was taboo. He never makes a big deal about it, which in my mind would trivialize and stereotype it. In other words, he respects the viewer’s intelligence. This isn’t a film about a gay man; it’s a film about a man. We know the hell that gay people were put through back then if they were outed. Ford took that private pain and tripled it for George, leaving him to suffer the ultimate tragedy in complete silence. The scene where he receives the phone call notifying him of Jim’s death is heartbreaking. Imagine having your world fall apart and have to come across to a stranger on the phone, “Oh, my, that’s terrible. I’m so sorry to hear that.”

If you’re in the mood to see some powerful acting (Firth won Best Actor for the role at the Venice Film Festival in 2010), spot-on period costumes, hair and sets, and a completely believable, real story, get thee to the vid store or Netflix. I promise it’ll be worth it.

On the Rat-O-Meter scale of five cheeses, I give A Single Man:

9 thoughts on “Review: A Single Man”