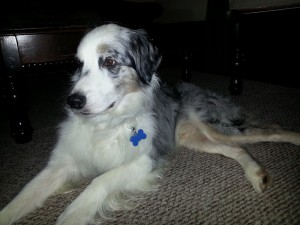 It’ll be two weeks tomorrow since Remington came to live with us, and as rough a start as he’s had with his intense fear issues, he’s come a long way already.

The biggest victory is his gradual-but-certain relaxation around — and increasing devotion to — the Thriller. Since I got out of the house to go back to school last Thursday, there’s been improvement every single day.

We’re enjoying the fun differences between Remy’s personality as compared to Rousseau’s. Remy is definitely more “puppyish,” whereas Rousseau just wanted to go for a walk, then take naps. He play-bites (never chomps down, though) and runs like a crazy man around the “track” (the dining room to the kitchen to the parlor to the living room, over and over and over). I’ve taught him to army crawl…it’s hilarious. I have to have the Thriller catch it on video.

Today is a sad day, though, as poor Remy goes into the vet for the ol’ snip snip. We’ll have a Conehead on our hands for a couple of days; I hope that doesn’t stifle his progress in other areas.

It’s a process for sure, eh dog lovers? We’re enjoying it all the same.

And now, behold and alas: it’s 5:30 a.m. Time to schlep it to the shower, the Finkmobile and the school house. One rehearsal tonight, and I’m done till Monday. Huzzah!