J’ever notice how some things — no matter how fantastic they look at the get-go — just aren’t that fantastic? Hmm.

Last night I made a turkey pot pie and biscuits to take to my stepdaughter and her husband (he is recovering from surgery, so a bunch of us wanted to cook for Simone so she could focus on being Florence Nightingale). I know they are chocolate lovers, so I looked for something really fun. On Pinterest, I ran across S’mores Bark. I thought, perfect!

Well…notsamuch. And this from a lifelong chocolate addict, trust me when I tell you. Anyway, more on the final verdict after you click through the picture show.

(Click on first photo to advance through slide show.) 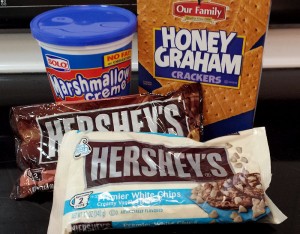 The really good part? Only four ingredients, and no baking. 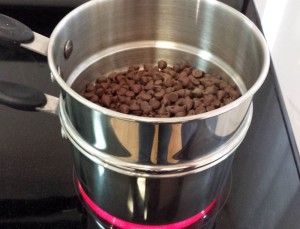 The recipe says to melt in the microwave, but I do enjoy the slower double-boiler method. 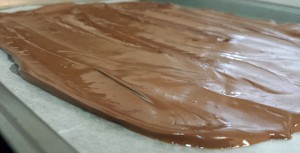 The instructions warned against spreading the melted chocolate too thin. I used the better part of a 9 x 13 jelly roll pan for the recipe, and it seemed the right size. 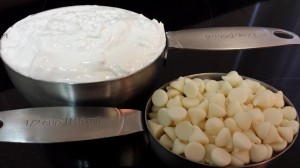 Melt the marshmallow creme and “white chocolate” together, and pour over the hardened initial layer. 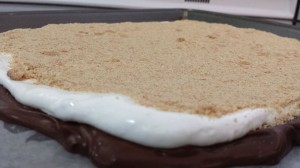 Add the graham crackers and press into the marshmallow. (Instead of breaking up the crackers by hand, I ran them through my coffee grinder because I thought it would look nicer. Turned out to be an unwise move.) 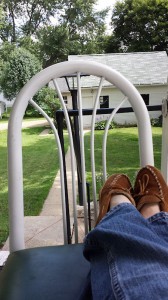 Put it in the fridge; wait 30 minutes. 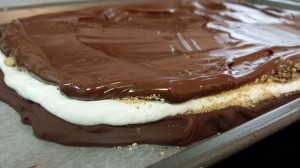 Melt remaining chocolate, pour over the lot, and pop into the freezer for two hours. 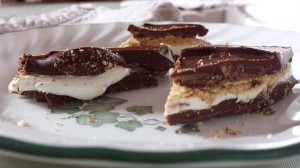 While I absolutely do not rule out chef error, I noticed a few niggling things about this recipe:

Bottom line: This recipe is more work than necessary, and the extra time didn’t justify the resulting taste and texture. If you want to have a bark-like S’more experience, just pour some melted chocolate on a cookie sheet, sprinkle with Graham cracker pieces and miniature marshmallows, and let set. *Bing* S’mores on the fly.

On the Rat-O-Meter scale of five cheeses, I give S’mores Bark:

Thanks, Suz — I think next time I want s’mores, I’ll just make the real thing.

I might be the only person that does not like s’mores…at all…ever! Just way too sweet for me…now the individual ingredients, those I can get into…graham crackers and coffee, oh yea! Great review…love the moccasins! Peace! ReplyRat Fink Reply:July 18th, 2014 at 6:10 amThanks, DLR! Wow, I really haven’t met anyone who didn’t like them, so you’re the first! It’s definitely a major sweet attack, even in its original form, and this recipe added like a metric ton of more sugar. *icky* The Thriller is the only person I know who doesn’t like graham crackers. He’ll tolerate them in a… Read more »