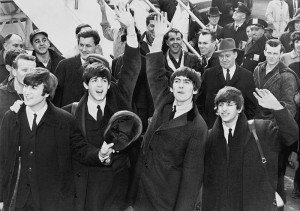 Fiends: I’M STILL WAITING TO SEE WHAT THE DEV SAYS ABOUT THE COMMENT COUNT ISSUE. UNTIL I GET IT SORTED, PLEASE CLICK ON THE TITLE OF EACH POST TO SEE IF THERE ARE ANY COMMENTS, OR TO ADD A REPLY YOURSELF. THANKS!

Honestly, that’s about all I did yesterday. I said I was going to do a whole lot of nothing, but it ended up being a great deal of Fabs — all the live-long day, and into the night.

I’ve mentioned before that I am working my way through a rather hefty treatise on the Beatles’ early years (Tune In). Clocking in at 1250 pages, I’ll be at it a while, seeing as how I’m only 200 into it. But I’m enjoying it completely, as I’m learning so much more about their pre-fame days (the book starts when their parents were born, and works slowly and meticulously forward).

Fortunately for me, I won’t be done with the Lads when I’m done with Tune In. For Christmas, Santa brought me these as well. I look forward to starting them around, oh, March, when I finally make it to the page in Lewisohn’s book where they stepped off the plane in New York, in February 1964. Man, I wish I’d been there.

I’m relatively knowledgeable regarding the Beatles’ public life, their effect on society and pop music in general, and the basic chronology of their adult lives and how and why the band finally broke up. All good fans should know that stuff. What I’m really enjoying now is the off-the-beaten-path information; the backstories and little-known facts about where and how they began. I mean, I knew about the fateful July 1957 Woolton church summer garden fete (where John met Paul, and Paul impressed him — which was near impossible to do — with his Little Richard and Elvis songs, and actually knowing how to play a real guitar), and about the Hamburg days and Pete Best and Stu Sutcliffe, etc. But their private studio experiences, as well as all the stories behind all their songs…well, that’s mighty delicious, and I’m keen to get started on it.

But first — we need to watch the Browns lose their final game of the season. I just wish it wasn’t going to be at the hands of the filthy St*****s. Blah.