So I’m leafing through Pravda (as you do), and I notice a headline that says, Married couple ignores washing and haircutting for 16 years. Hey, why not.

Would you eat a “miracle fruit” that makes Tobasco sauce taste like a chocolate milk shake? (Watch the video halfway down the page.) 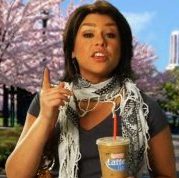 “The kaffiyeh, for the clueless, is the traditional scarf of Arab men that has come to symbolize murderous Palestinian jihad.”

There is no God.

Now people, I consider myself a moderate conservative, but this thing gets the Cockamamie Dingbat Story of the Decade award. Besides, I’m more offended by the lip collagen and scary eyebrows than by the scarf. Girlfriend’s had some weirdness done to her eyes as well, but I can’t figure it out.

Apparently, no one is exempt from being searched at the airport.

I think I’ll go make the vanilla Dunkin’ Donuts coffee Heather got me for Mother’s Day. Support me some terrorists.

If they had cut the fringe off the scarf, not a word would have been said. What’s next? Will the Golden Arches be construed as a terrorist symbol? Geez. 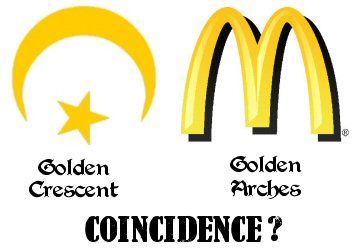 Did I tell ya?!! McTaliban Fries are next.