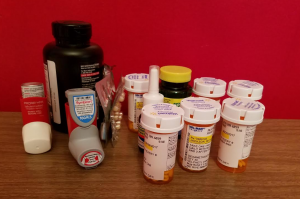 Every morning, he looks at the ever-expanding collection of medicines on the breakfast table, and screws up his courage.

His lung tumors and swollen lymph nodes are pressing on areas of his larynx and vocal folds, as well as on his esophagus. Not only can he not ever clear his throat or get a productive cough (take a moment and envision going through that 24/7), but now he is having trouble swallowing. Taking these pills each day is getting to be an uphill struggle.

But he still found the humor to laugh about his clumsiness with attempting to put some cans of pop in the fridge and scraping his arm against the cardboard packaging. He proudly showed me yet another bandage on his arm. The man simply cannot stay out of trouble.

So, the public service announcement…

Did you know that lung cancer is the #1 cancer killer of both men and women? According to the American Cancer Society, lung cancer kills more people each year than breast, prostate, colon, liver, kidney and melanoma cancers combined. We have massive awareness campaigns for these other types of cancers, but where is the ribbon for the #1 killer? I’ve never seen a mainstream push for screening for lungs. Shall I start one? I wonder if the Thriller would volunteer to be the poster child. Hmmm…

You may ask: What is the screening process for lung cancer? Well, that’s where it can be a bit tangled and dark. Suffice to say that I know an encyclopedia’s worth of stuff about lung cancer today, compared to what I knew in May. As you might imagine, I’ve done little else with my spare time except read up on it:

I wanted to know some history of the disease, especially as related to cigarette smoking. Here’s the initial trend, from the Lung Cancer Guidebook:

Lung cancer is a relatively new problem for human beings. In the early 1900s, lung cancer was extremely rare. Although people have used tobacco for centuries, until the early 1900s, it was most often smoked with a pipe, in a cigar form, or chewed. The machines to mass-produce cigarettes were invented in the 1880s, but it was not until after World War I that cigarette smoking became prevalent in the United States.

During the war, American soldiers were given free cigarettes donated by tobacco companies to the U.S. military. Many soldiers left the military with a lifelong addiction to the nicotine in tobacco products. At that time, the medical community did not realize the long-term impact of cigarette smoking on health.

So here we are, a hundred years later, seeing the avalanche finally letting loose. It’s time to bring lung cancer forward on the parade route, not to supplant the other kinds of cancers out there, but to march on the same front line. Consider me endowed with a new purpose.