I don’t know how I found it last night, but somehow I ended up on some guy’s Flickr site about transistor radios. It was a walk down Memory Lane.

Back in the early 70s (around ’70-’73), Mavis and I would spend our entire summers at “The Pond” in Brown Deer (a suburb of Milwaukee) where we grew up. It was a manmade lake, complete with trucked-in sand for a beach. If you could swim to “the raft” — a stationary platform in the center of the pond where the lifeguard perch was located — then you had truly arrived, and they’d let you swim in the “deep end,” which was all of six feet. (I cannot BELIEVE I found a group of people on Facebook who started a BD Pond fan page! Ka-RAZY. Of course I joined, and so did Mavis. We had a huge laff.) Our parents bought us each a transistor radio to take with us. We used them everywhere, especially in our bedrooms. 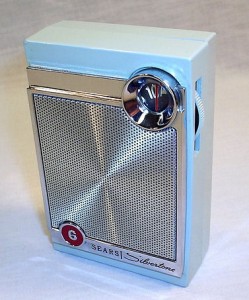 I specifically remember putting the radio under my pillow and listening to WLS or WOKY play a list of Beatles tunes in the spring of 1970, when Paul “officially” left the group. I was so sad. The last song they played was “The Long and Winding Road,” and it was late (probably like 10 p.m., but to me it seemed like the middle of the night). I knew I’d be in a world of trouble if Mother walked in and caught me awake, listening to the radio. I loved that radio. I can’t really recall exactly what it looked like, but it was something like what is pictured here (cool photos courtesy of the aforementioned guy). It’s likely close enough; our parents bought everything at Sears.

Dad had one of these in the garage. When he’d do yard work or work on the car, he’d listen to Cubs games on it.

And I can’t remember if I had one of these mod round radios or not. I *think* I did…Mavis, did I ever? If I didn’t, I know I always wished I did.

We didn’t know thing one about sound quality; highs and mid-range and what have you. We just knew that we could take these little jobs to the Pond and spend all day singing along to “It’s Too Late” and “Maggie Mae” and “American Woman” while we nursed our intense crushes on lifeguards named Reinhardt, Jeff and Bob.

Happy Monday — off to another insane week.

I too had a transistor radio and listened to CKLW out of Detroit. We went to Pin Oak Lakes in Berlin Heights and swam out to the raft in the middle of the “lake” too.

Such innocent, lazy, wonderful days! I want to be 13 again.

I remember CKLW! I listened to it all the time, too. Back when radio stations were the iPods of today…sheesh. Those were great times indeed.

Oh my gosh!! You most certainly DID have one of those round radios! You got one for your birthday. I’m thinking it was a red one, too! I just wish I could remember what they were called back then. You brought back a lot of memories today, Berd. I listened to my transistor each and every night (under my pillow) before going to sleep. Brown Deer Pond was my favorite place in the summer, but the skating rink in the winter was my second favorite. Remember the warming house? ;0) My best memories ever happened in Brown Deer, Wisconsin. Thanks… Read more »

I do remember the warming house at BD park! But as I remember, the ice skating was something you did with your friends more than I did. I don’t recall ice skating that much. It was you and Missy and Peggy and all your krazy friends.

Living in Minneapolis/St. Paul 1978, listening to Minnesota North Stars games on a little brown clock radio in my bedroom. The North Stars were so terrible, they never won, but Al Shaver called the games with so much fire anyway. Then one night, against the great Montreal Canadians, they pulled ahead 4-3 in the second period. I was convinced it was because of how I was laying, which was on my side, facing the wall, nothing special. But I didn’t move a muscle for the next 90 minutes, and the North Stars won, 4-3.

Thanks for the radio trip.

Awesome memory, Ross. I have a ton of special recollections like that. To say it was a “simpler time” is no overstatement. I loved growing up in the 60s and 70s.

Oh, lordy! I had a transistor radio, too… it was a Zenith that looked a lot like the Admiral in the box set. My grandpa worked for a local distribution company & he got it for me for my birthday one year. Man, that’s some livin’, ain’t it??

My mother wouldn’t let me have a transistor because she didn’t like the way kids walked around with them pressed to their ears [she feels the same way now about cell phones]. When I was 12 I moved out of the same room and the same bed with my little sister. My new room had blue polka dot curtains and I bought myself a clock radio with baby sitting money. I remember my mother, sister and I all gathered on the bed listening to CKLW in Cleveland on MY radio and I felt so very grown up.

I’m just really confused as to how those little colored balls are radios. How do you tune it? Where are the speakers? I’m just so confused right now. I need my iPod. It’ll help me make sense of the world.

What great stories everyone! Loved reading them. And it’s OK, Kody. Once you’ve listened to a transistor radio, you’re infinitely glad you have an iPod.

Wow it sounds like we had almost identical youths! I had one of those ball radios, a blue one. My sister had one of these http://farm3.static.flickr.com/2163/2147485665_9de6d1cb60_s.jpg the Toot a Loop or something in red. We took them to Blue Lake Fine Arts camp and listened to them the whole summer. Swimming in the summer at the pool and drooling over the lifeguards, skating in the winter. What else IS there to do in the MidWest?? LOL