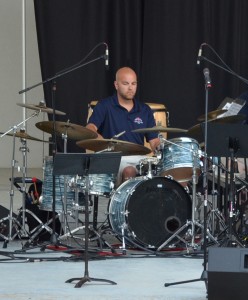 It’s been a great week for mia famiglia.

Last night, I enjoyed hearing #1 Son play some mean drums in a jazz concert at the park. Boy was kicking that band.

It got me to thinking — and I struggle with how to say this without it sounding tired and cliché — how much music has meant to me and mine over the years. I’ve been performing since shortly after a man named Mr. Roberts came to my classroom in 1967 and demonstrated the violin. It’s pretty much been nonstop; I can’t think of a single time when I wasn’t knee-deep in some music thing. My boys were immersed in it growing up, and it’s gratifying to see them both become fine musicians.

On my bucket list is to play with them in a band again. I will do this before I croak.

All right, time to git bizzy. So much time, so little to do…