Not mine (although I seem to be doing that as well, but that’s another kettle of fish). Rather, I’m talking about the Eastern Conference Finals. 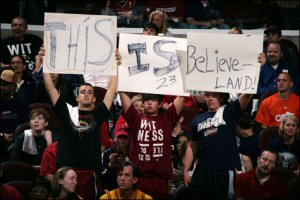 After blowing a 20-point lead (again), it looked like the same old same-old. I was just a little sleepy, so I gave up after the 3rd quarter, when the lead was bouncing back and forth and the Cavs appeared poised to do what they always do. 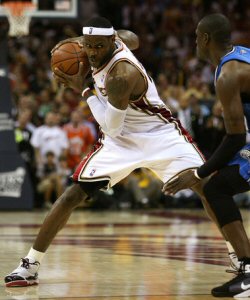 Imagine my surprise this morning…

Of course, the question on every Cavs fan’s mind is, “Can they win in Orlando tomorrow night?” My question is, not surprisingly: “By how many points will they lose this time: one, two or ten?”

Remember, motor mouth (but admittedly funny guy) Charles Barkley picked the Magic to win the Finals. There are people who’d like nothing more than to prove him — and everyone else with eyes and a brain — wrong. My guess right now? Barkley’s right. Orlando is the better team. All but two of the Cavs’ losses in the regular season were on the road, so tomorrow’s game in Orlando might be painful.

I know, I know, basketball fiends. History doesn’t matter in the playoffs. Well, I beg to differ. But…we’ll see about all that tomorrow night, now won’t we.

Graduation this weekend, then singing at a memorial service on Monday night. (BFF Kay lost her dad on Memorial Day. He was a sweet guy; I loved him.)

4 thoughts on “Prolonging the agony”