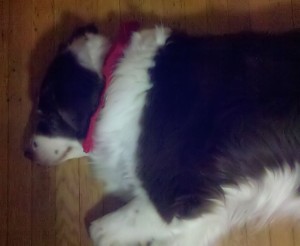 While the Thriller and I are still hacking and wheezing and feeling generally miserable, at least we don’t have to have surgery this week.

Rousseau goes in on Friday morning to have some cysts removed. He’s had them forever, and they never bothered him until we found yesterday (when I went to pet him and drew back a bloody hand) that one had ruptured and abscessed. It was buried under his double coat of fur, and we didn’t see it. It’s located on the side of his neck, which means that he can reach it with his hind leg to scratch it. So after he got back from the vet (she shaved the area around the abscess), I cut up an old turtleneck, and he’s now sporting a lovely dickie that covers the wound. All levity aside, we thought the worst yesterday. He refused food and water, and was moving slower than ever for his 12 years. (Although if you have pain, you don’t usually want to eat — not surprising.)

Thus ends my all-too-brief flirtation with anything resembling a spring break. I myself am hauling it back to the vet for humans after school today, and the Thriller’s on deck for Thursday. I’ve never once in my career taken all my allotted sick days, but it may happen this year. Unbelievable. I: the girl who never gets sick.

You guys sure have been through the sickness mill! I keep praying for you, though. Hopefully you and Michael will start feeling better, and Rousseau will come through his surgery just fine! Poor puppy. I’m sure he’ll feel much better after Friday is over and done! Keep me updated, Birdicus. Love you all!! ReplyRat Fink Reply:April 10th, 2012 at 4:03 pmI sure will, Mave — I plan to have the Thriller keep me on the text update list, and I’ll pass along all info to your phone. I’m looking forward to having Rousseau out for the ten-count for awhile afterwards.… Read more »

Oh no! Poor guy! My golden had the same thing only it was on her side. The vet lanced it and I spent a couple of weeks with twice-daily warm compresses and medication (topical and systemic) and it did finally go away. They really are important members of the family, are they not? I worry about my 4-legged children all the time. Give him lots of extra hugs and a filet mignon if you have one handy…. LOL PK Animal Mom ReplyRat Fink Reply:April 10th, 2012 at 4:02 pmThey really are family members, PK. I too worry about the 4-leggers!… Read more »

Oh dear, everyone being sick together doesn’t sound fun! Good to hear that everyone is being seen by a doctor of some kind. ReplyRat Fink Reply:April 10th, 2012 at 4:06 pmI know, right? It BITES! I’m sure you’ve been there before, too. The doc gave me a prescription — 7 pills for $105. Not happening. He said, “If it’s bacterial, this will catch it.” I asked, “And if it’s viral?” (Which the vast majority of upper respiratory ailments are) He said, “Then you just wait it out and treat the symptoms.” Which is what I plan to do. Stupid pharmaceutical… Read more »

Poor boy! Hope they get him squared away & good as new! ((HUGS))