Twenty-two years ago tomorrow, the worst nuclear disaster in history took place in the Ukraine.

At around 1:00 a.m. on 26 April, 1986, a test of one of the reactors at the Chernobyl nuclear plant failed. The water used to cool the reactors began to get increasingly hot — close to boiling. In spite of the many red flags indicating that the test should be aborted, engineers continued.

Then, at around 1:23 a.m., a huge power surge occurred. Engineers called a shutdown to the test, but it was too late. A buildup of energy, increasing exponentially every few seconds, caused Reactor #4 to explode, spewing untold amounts of nuclear fuel and graphite into the atmosphere. Fires were everywhere; people were incinerated. 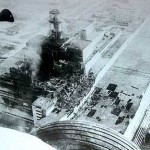 The reactor suffered a total meltdown. [Click pictures for larger views.] The main operator in charge was somehow rescued and taken to a Moscow hospital. With the exception of one small spot, his entire body was soaked in radiation. When he died, they buried him in a coffin lined with lead. 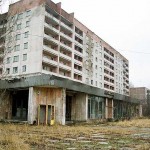 The Chernobyl explosion produced more radioactive contamination than the bombs dropped on Hiroshima and Nagasaki — combined. The cities of Chernobyl and Priyapat (at one time, a thriving town of 50,000) are still deserted, 20+ years after the explosion.

As you might guess, the aftereffects have been ugly and long lasting, and children are the most affected. 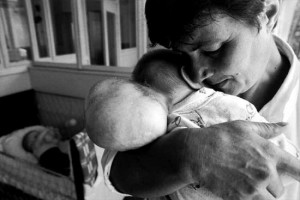 Tumors, deformities, and other maladies plague many of the residents. Thyroid cancer runs rampant.

Although the death toll was officially listed at 50, estimates of the total dead in the Ukraine and Belarus as a result of the Chernobyl disaster could reach another 140,000, according to Greenpeace International. Even more horrifying: the Ukraine is once again planning to build nuclear reactors.

Just found this photo blog – amazing pictures of what is left of the city after 20 years.