Since buying the tickets six weeks ago, I had been anticipating the Postmodern Jukebox concert last night with great enthusiasm.

For those who don’t know, PMJ is the country’s — maybe even the world’s — hottest cover band. They don’t do original songs; rather, leader Scott Bradlee arranges existing material into many different genres (Dixieland, 1930s swing, country, jazz, Klezmer…you name it). The fun part is that he uses a bunch of different performers, mixing and matching them for each video he produces. Obviously, the big payoff is coming to them via touring. To my knowledge, they don’t have a record contract (yet), but if I was Bradlee, I’d run away from those guys like my hair was on fire. 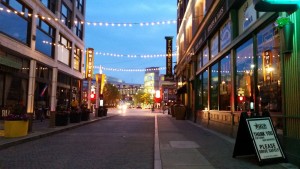 Anyway, we queued up last night on Cleveland’s beautiful 4th St. sidewalk, outside the House of Blues at a little before 7 p.m. (our tickets listed the start time as 7). Then the guy with the booze bracelets came down the line, carding people who wanted to drink inside. *forehead smack* Of course the show started at 8:00, not 7:00. Why? Because we have to sell an hour’s worth of hooch to grease up the crowd.

We looked at each other for a few seconds, and said, “Let’s go to the casino until 8:00.” [Good idea, too, because 15 minutes into playing, we hit quad aces with a kicker. Another home improvement project funded, yay.]

When we returned to the venue a little after 8, the show had just started. This incredibly zoomed, grainy photo of the incomparable Von Smith was just about all I was able to get — and this picture was taken with my arms stretched as far as they would go above my head. Now you know my visual vantage point for the evening.

I know. It was House of Blues — an SRO venue — what did you expect? I guess I expected to maybe, possibly be able to see, or that the stage might have been just a skosh higher up. I momentarily considered entering the fray of pressed-together bodies on the main floor, but it was fully 100 degrees F in the space in front of the bar where we were standing; I could only imagine how yummy-steamy-sweaty wonderful it was in the pit. Next time: balcony. What was I thinking? It would have been so worth the extra money, although the energy in the place was so crazy, the balcony seats may have been a wasted expense, because everyone up there was likely on their feet, too.

At any rate, Scott Bradlee’s band was out of this world, and the singers and tap dancer were fantastic. Despite the sometimes-shoddy sound mix (some singers were heard very well, while the sound guys couldn’t quite solve the haunting fragility of Haley Reinhart’s voice on Radiohead’s Creep), it was a fun night of great music. Definitely the quintessential “club gig.” I’d go see them again.

But Mama will sit down.