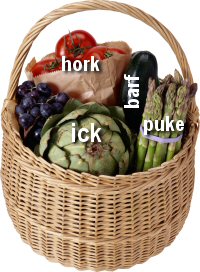 Sometimes, I really do hate being such a picky eater. I like all the wrong things, and hate many of the right ones. Why is that?

My mother always cooked balanced meals. I mean, they were probably heavy on the starches, as that is what most down-home, Midwestern girls raised on farms were taught to cook, but we usually had a meat, a veggie, some kind of potato or noodle or other starch, and bread if we wanted it. There were lots of casseroles. And iced tea. Always iced tea, 365 days a year.

I also don’t know why my sister likes vegetables and I don’t. I know it’s personal preference and all that, but we were subjected to the same foods growing up. Why does she like cauliflower and broccoli, and I do not? Some veggies are ok. I’ll eat the basics: green beans, peas, corn, celery, carrots, lettuce. [Bizarre side note: I can make a meal out of cold, pickled beets.] But everything else…all the trendy, “you have to like these” vegetables, I can’t stand. 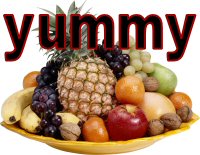 Not that I abhor all healthy foods, mind you. I do love the fruit experience, although much of it is high in sugar.

And the weird thing is that growing up, we hardly ever had dessert. Super strange, because my mother was a sugar addict until the day she died, and my sister and I have been for decades. It’s no wonder my mom was Type II diabetic, and Mavis and I are both hypoglycemic.

How did I get this affinity for sweets? There are several theories which I won’t bother reciting, but suffice it to say that when I was a child, sweets were sacred, awe-inspiring, more-valuable-than-gold rewards. If we were good at the market while Mother was doing her grocery shopping, she’d buy us a candy bar or some ice cream from the Treasure Island snack bar. 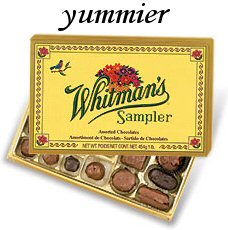 If we were delightful little girls at the department store when Mother needed to shop for clothes or a wedding gift, she would reward us by stopping at the Woolworth’s candy counter. We always got the same thing. I think Mavis chose M & Ms, and I got the chocolate stars. A quarter-pound, and that was all. But it was heaven; something to work towards.

And there was no “saving for later,” either, dear heart. Every last piece of candy was gone before we got home, as if it was going to somehow disintegrate in our hands when we walked through the door.

It wasn’t Mother’s fault. She grew up on a post-Depression farm with next to nothing. She almost single-handedly raised her eight younger siblings, and I’m sure sweet treats for the entire family were basically non-existent. A box of decadent chocolates or a selection from the candy counter was totally beyond her reach until she married my dad.

Speaking of decadent: My favorite sweet treat of all time…. 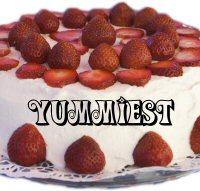 Cake! I’ll take any type, in almost any flavor. As long as it has that fluffy, springy, cake-y texture and lots and lots (and lots) of icing, I’ll take it. The more of it, the better.

Of course, I also like these, which is about the equivalent of pouring a half a cup of table sugar into a bowl and spooning it down the hatch. But they’re not near as much fun as cake.