I’ma say this one last time (well ok, it probably won’t be the last). 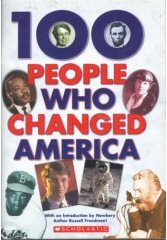 A teacher apparently cleaned out some shelves in his/her classroom last week, and left a stack of several copies of this book on the faculty lounge table, with a sign that said “Free.” The title intrigued me, so I took one. Free books are like Christmas to me, so I was happy to get the gift.

That is, I was happy until I noticed an unforgivable, egregious, stupid, blatant and ridiculous error.

Nikola Tesla was left out.

I was incensed. After doing an initial, unsuccessful fanning of the pages to locate his picture, I went to the index in the back of the book. Nowhere to be found. Incredible. And this is a book by Scholastic — one of the leading publishers of K-12 textbooks in the country. What the world is going on here? Edison is listed, but not Tesla? Maya Lin, but not Tesla? Tiger frigging Woods, but not Tesla? It’s madness. Madness. I’m getting mad all over again just writing about it.

So I went to the web to see what other people thought about it. To my surprise (and, admittedly, utter delight), I found a review of the book at Amazon.com, submitted by an engineer. Her comments:

[T]he author forgot to mention the inventor of the electric systems used today; the AC motor, the triphasic electrical system, the AC generator (as in Niagara Falls), wireless communications, remote control, logic circuits, fluorescent lamps and many other [inventions] without which our lives today would be totally different. What would America be without Nikola Tesla?

Now, see here. I’m no conspiracy theorist. In fact, I think most conspiracy theories are crap. But consider this: Tesla wanted to provide wireless capability for everyone in America — for free. Could this explain why billionaire J. P. Morgan suddenly yanked his financial support for Tesla projects? Well of course it could, sweety. Inexplicably, Tesla had enemies, not the least of which was that little rodent Thomas Edison, whose apparent mission in life was to discredit Tesla.

Disclaimer: This is not an Edison bash-fest (although it probably looks like one). He was a brilliant man who contributed tons to the development of powered technology in this country, and in fact, the world. I just think he hated competition, and Tesla was doubly bad news because he was right. At least about this.

Back to the drama…

Edison must have known on some level that his direct current was dangerous and inferior when compared to Tesla’s AC system, but it didn’t stop him from launching a macabre, minstrel-show tour of horrors, where his assistant would use AC to electrocute dogs, live, on stage, to show how dangerous alternating current was. Tesla was, at this time, partnered with George Westinghouse, and Edison used him as a target as well.

One of Edison’s assistants got his hands on a Westinghouse AC generator, and had the bright idea to give the American public the ultimate demonstration of the horror of Tesla’s alternating current: use it on a human.

Such was the unspeakably cruel fate of William Kemmler at his execution. He was supposed to hang, but Edison’s lackey had a better idea. Here is the newspaper account from 1890, written by an eyewitness to the 9-minute “death by torture.” It will make you sick.

That’s it. I am going to do my own list.

Don’t mind me. I’m just a lil fussy this morning.

Fink out (of sorts)

At least Tesla doesn’t have a high school in his hometown with an obnoxious, crappy band attached to it. The word “Edison” draws a shudder from most any musician within 50 miles, but say “Tesla” and no such revulsion ensues. Small comfort, I know….