Explaining my love for the Beatles is like trying to spoon up mercury. I can come close to catching it all in a simple, tidy container, but not. 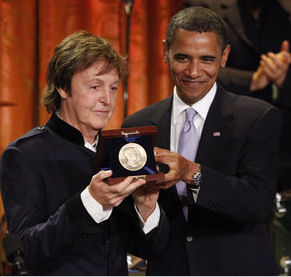 McCartney got the Gershwin Prize for Popular Song last night at the White House. He’s in great company, along with Stevie Wonder and Paul Simon. So why do I think he’s a great songwriter? I can’t really say. John was equally as great, with George coming in a distant third. What is/was it about the band that makes me love them?

Hm. I just read those four items, and it still doesn’t really explain why I adore their music, and why it’s part of me on an absolute cellular level. I guess I’m trying to say that it’s not the four men personally that make me love them, although I was married to all four of them at various times during the sixth and seventh grade. Rather, it’s the way their songs spoke — and still speak — to me in a very personal way, both as a musician and a human. Does that make any sense?

Anyway. Time to get ready for my contract day. For you non-teacher types, that means the LAST DAY of the year! YAAAY!

5 thoughts on “Paul is fab”