It was nice that the only state remaining on my “never visited” list (in the lower 48) was such a pleasure to roam over the last two days. 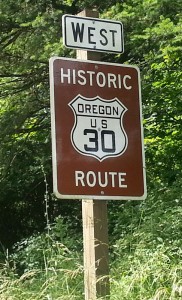 Using our nice room in the ski village of Government Camp as a home base, we spent our time enjoying waterfalls, mountains and the beautiful Columbia River.

The most enjoyable part was traveling along historic US 30, along the river gorge. Unfortunately, our views of Mt. Hood were obscured mostly by clouds, and when we got up near the summit, where the skiers were playing, the snow was dirty and ugly, and there weren’t many photo ops. I guess, after St. Helens and Rainier, it was a bit of a letdown. Still beautiful, though, wow.

I got another picture later, from the highway, and that was our best Hood photo.

The biggest thrill for us was the Columbia River. Of course, after eating a spectacular lunch at the Multnomah Falls Restaurant, we walked up to the falls and took some photos. (I also took a couple of videos for the grandsons.) 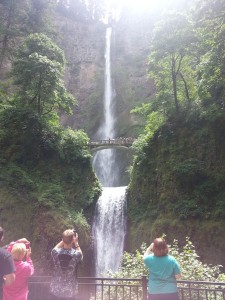 The sun was directly in my eyes for this photo, so it isn’t the best resolution, but this particular bridge is the most photographed piece of architecture in all of Oregon. No surprise there, right? The view downward from the bridge made me kind of woozy. It was all fantastic. 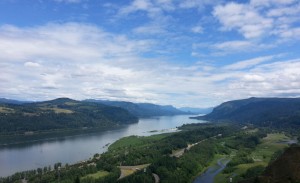 The Columbia River, from Vista House

We stood on the top balcony of Vista House, and as it was a clear day, we saw forever. Breathtaking view.

And now we’re off to sunny California, to walk along the chilly shores of the Pacific, and see some tall trees. Check ya later, fiends — and happy Finkday!

HAAAAAA! Kermit was hysterical! Thanks for that laugh, Bird.

You got a picture of my waterfall! It’s gorgeous. You’d have a hard time getting me to leave.

Thank you SO much for sending me the video of the Columbia River from the Vista House. I’ve decided that’s exactly what Heaven will look like!

It is a heavenly view for sure! We knew you would like it.

We’re both about ready to conk out for the night…doin the tall trees tomorrow! XO