What a day yesterday! We finished out our stay in Oregon in fine style, seeing some of the most beautiful sights we’ve ever visited.

It was a bit of a long drive (378 miles, about 7 hours of drive time), getting from Government Camp to Crescent City, California. We added several hours to that by seeing some awesome places: Crooked River Gorge, and the amazing Crater Lake. 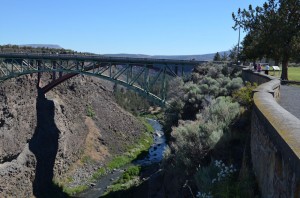 The Ogden Scenic Viewpoint at the Crooked River High Bridge (in rural Jefferson County, OR) is named after Peter Ogden, an Oregon pioneer, and strangely, the namesake of the city of Ogden, Utah.

We happened upon this fantastic park quite by accident. It was a bit unsettling to see that the concrete barriers were only waist-high, and that one over-balanced camera shot posture could send someone 300 feet over the edge, on the way to meet Jesus. In fact, pets are not allowed at the viewing wall; signs warned that many dogs had died — presumably by having paws up on the wall and seeing something just on the other side, and jumping after it. *shudder*

But wow, what a view. And speaking of views… 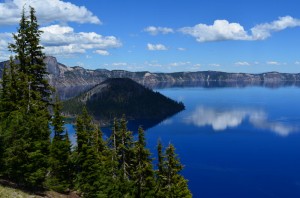 Crater Lake is a picture waiting to be made. I told someone on Facebook yesterday that it appeared to want its photo taken. My only regret was not having the wherewithal to creep down that steep hill and put my feet in the lake (and by “wherewithal,” I mean the ability to get back up the mountain afterwards).

No matter the vantage point of your shot, you were photographing likely the most gorgeous body of clean water in the world. We stood for a long time and just tried to take it all in. And while I was standing there, a visitor showed up on the rock barrier right in front of me. I wish I’d been fast enough to shoot the picture while he was looking right at me.

After leaving Crater Lake, we were already tired, but faced another 3+ hours on the road. We dragged into the Lighthouse Inn here in coastal Crescent City, CA, around dinnertime. We got some food, took showers, got PJs on, and called it a night.

Today — the Redwood Forest! Back at ya tomorrow, fiends, and happy Saturday!