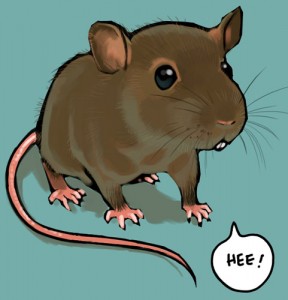 Well…a week and a day, but I wanted to yammer about it this morning.

I am a happy rat.

It’s almost time for the New England Odyssey. Pre-flight preparations are already underway in the dining room. That might explain, incidentally, why Rousseau is glued to our legs all danged day long. Pup hates suitcases, and there are two of them sitting beside the dining room table. He has learned to equate luggage with leaving, and it totally shakes up his juju to see us messing with bags.

He doesn’t know it yet, but he will be happy when we leave, because he gets to go to BFF Kay and Bob’s farm for his vacation while we’re on ours. He loves it out there, so he’ll be content. Doesn’t help him much during the packing stage, however, so he gets extra hugs and biscuits lately.

Speaking of packing…after two major road trips in as many years, and a dozen small jaunts in between, we’ve arrived at a pretty solid take-along list. There are two things we don’t leave home without:

Of course, we try to pack light. In my mind, I go through all the outfits I want to take, then take away half of them. Seriously. We’re going to be either walking or sitting; I don’t need six pairs of shoes and four sweaters.

We also take a cooler of snacks, lunch stuff and drinks, to avoid extortion from convenience stores and travel plazas. I have made many a ham-and-cheese sandwich at 70 MPH. Saves time and bones.

So, fellow road warriors: do you have any cool packing ideas, or rituals you go through before and during your trips? I’m up for hearing them and using them!

6 thoughts on “One week to go”