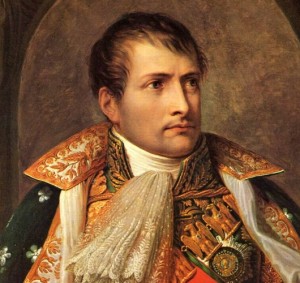 …in 1796, Napoleon Bonaparte married “Josephine.” I write her name inside quotes because her name was Rose, but Napoleon didn’t like it.

In 1987, I glued myself to a miniseries on TV called Napoleon and Josephine. I was immediately smitten with its dreamy star with the French name, Armand Assante. I’d never heard of him before that show. Even with the unattractive Napoleon hairstyle, I thought he was divine; diviner than any other actor I’d ever seen play the notorious emperor. Anyway, back to the history.

Now Nappy was no saint; aside from his well-documented megalomaniacal tendencies, he regarded adultery by a man acceptable (as did many in past societies), but grounds for divorce if a woman committed it. Indeed, his misogyny is also recorded for posterity:

Still, the little nutter had a soft side, and no one exposed it in its most painful manifestation as completely as the lovely Josephine. This morning (since I was up at 3), I happened to read some lectures about her, and she wasn’t a victim, either. To be sure, she was a conniving and heartless wench at times. Napoleon, away on a conflict, constantly wrote to her, confessing his love and entreating her to come join him in Italy. He was hopelessly devoted. Yet, Josephine was far too busy to bother with him, because, well…she had parties to go to and men to entertain. Lots of men to entertain. But he forgave her because he loved her. That was his first mistake, apparently.

When it finally came time for Napoleon to crown himself Emperor of Europe (a move that so infuriated composer Ludwig van Beethoven, he scratched out the name “Bonaparte” on his new symphony and named it “Eroica” instead), he brought the Pope all the way from Rome to Paris to preside over and bless the ceremony. It was at that inopportune time that Josephine “let it slip” that she and Napoleon had never had a church wedding. Back up the truck, Chuck. Party’s over, Pope goes home, and Nap has to make nice and not divorce Josephine. The thing plays out like a dime novel.

It all ended badly, unfortunately. I just thought it was interesting to read that, as happens pretty often, a powerful man can control everything in his life, except his woman. HA.

And there’s your history lesson on this lovely Finkday. Happy weekend, yay!

That you did, come to think of it!

A good read and interesting history lesson, thanks for sharing!

The only thing I like about Napoleon is the “hand in shirt” pose which I do on occasion.

Awesome indeed, mon frère. And since you model it, you should know its origin. From “Dressing Classical Statuary: The Eighteenth-Century ‘Hand-in-Waistcoat’ Portrait.” by Arline Miller: Miller points out that the ‘hand-in’ portrait type appeared with “relentless frequency” during the eighteenth century and became almost a cliched pose in portrait painting. The pose was used so often by portraitists that one was even accused of not knowing how to paint hands. “In real life,” Miller observes, “the ‘hand-held-in’ was a common stance for men of breeding.” Miller goes on to give many examples of this posture in painted portraits dating from… Read more »

You are full of cool historical facts today!

A stance for men of breeding…and “manly boldness tempered with modesty”…thats got me written all over it haha.