It’s not their fault. It’s their parents’ fault. Our completely, irretrievably broken public education system is at fault, because teachers have to teach to this ridiculous battery of useless tests. It’s because of texting and Facebook and Twitter. It’s because no one cares.

Then there’s the make-me-want-to-run-somebody-through-with-an-awl statement, “It’s just words — what’s the big deal? Language evolves, and this isn’t your grandmother’s America, so get on with it.”

I know other English speaking cultures (Great Britain, Australia, Canada) misspell words. Just saw it this morning on an anti-American, Canadian-run site. (More on that another day.) Still, the US takes the cake on mangling its language, and it’s approaching — as I predicted two decades ago when I started teaching and witnessed it firsthand — the point of no return. 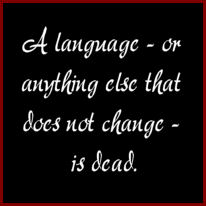 Now I’m not talking about Americans mangling British English. I offer no apologies for my American accent, the sound of which honks off many Brits. And it’s not about picayune issues of retaining British English’s original sound and meaning, as Prince Charles would have it if he were king (which, given his mum’s robust health, isn’t bloody likely). And I’m not fool enough to think that languages don’t evolve. If they didn’t, we’d still be talking like Chaucer.

Rather, it’s the mangling of the most basic tenets of syntax; the rules I learned in fifth and sixth grade. As predicted, said disfigurement is now showing up in the professional workplace — where stuff like this matters. On Facebook last night, RtB fiend Stoney referenced an article in the WSJ that addressed this very issue, and I must tell you it makes me want to launch kittens.

To reiterate: I’m not saying that everyone should go around talking and writing like some Oxford English professor. I’m saying that proper usage and grammar have a place — and the future likelihood of our youth sounding like complete unintelligent donkeys depends heavily upon what’s done about it now. Unfortunately, it’s not looking too good for the home team.

I like to do the “Word of the Week” game in my choir rehearsals. (I’ve been basically terrible at it with regard to weekly consistency, but hey, I try.) Each time, I attempt to correct a common misconception about grammar or spelling, and invariably, someone mentions it in later conversations, which delights me to no end. For instance, a student has said to me, “I told someone in government class today that there’s no E in marshmallow, and she didn’t believe me. We had to get out the dictionary so I could prove it.”

And a good deed shines in a weary world. 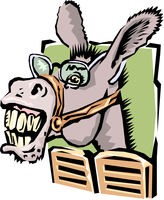 Again, as I have said in the past: I direct this rant at myself as well, for there are holes in my usage armor sometimes, too. Not often, but sometimes.

PS – Take the quiz at the Journal site. I loved it — well done!

OK, I’m a day late (and probably a dollar short as well), but I must share what I saw at the Ulta salon this past Monday.

AAARRRRRGGGHHHHH! Fink’s rant does not mention spelling errors, but they are some of the worst language violations committed, given the proliferation of spell-check programs and the ease of access of same.

PK
Getting down off the soapbox and heading for the Tylenol…..

Appointmant, hA! I must say that is the first time I’ve seen that one.

It reminds me of this place in my town:

In order to get to Starbucks, I have to go past it.

I drove through one day to get a coffee, and I asked the owner, “Um…has anyone ever commented on the spelling of ‘espresso’ on your sign?” He said, “No, why?” At that point, I pretty much gave up. I muttered something — can’t remember what — and got my watery latte and left. LOL

I’m not sure if I recall what,“Word of the Week” is.

I’ll try to be better at it this year.