Fine. Tell me I’m a pretentious prig; I won’t care. Tell me I worry about unimportant things. I will block you — with a shillelagh. Or better yet…with the Grammar Hammer®. Heh. 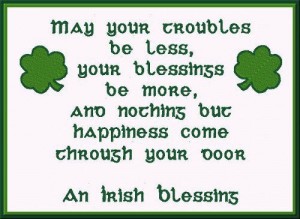 No, no, no. I don’t care if it *is* an Irish blessing. Bless the Irish lad who coined that phrase, but it’s wrong.

You can have less trouble, but troubles are individual things that can be counted. So while I may have less trouble in my life by not posting about fewer vs. less, I would have fewer troubles if people would just memorize the difference.

If you take away one of the three pears in my refrigerator, I would have fewer pears to eat — not less pears. I would have less fruit to eat, but fewer pears. You see, “fruit” is a mass noun, or something you really can’t count individually. Alternately, “pear” is a counting noun. You can pick ’em up and count ’em, one by one. Therefore:

One cannot have less pianos in the house. One can have less music, mind you. If there are fewer pianos (things you can count), there might be fewer songs (also things you can count), resulting in less music (mass noun; can’t be counted) — unless, of course, you are a pretentious prig of a different color, and you actually say idiotic words like “musics” and “musicking,” which will send me off into another deranged tirade for which I haven’t the time this morning.

Are we good? Good.

Is it production week? Why yes, I believe it is. And here I am, already in need of a time-out and a nap. Cruel world! Cruel.