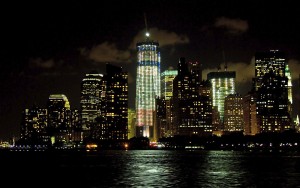 Staten Island Ferry at night? Let’s do it.

While it won’t last as long as previous Odysseys (one week instead of three), it’ll still be fun.

If you know where I’ve been lately, you might be asking, “Why New York City again?” Well, you see, although I’ve been to Manhattan eleventy times, I’ve never been there as a grown-up. You know…without students along. I’m not complaining about that, mind, but it’s just that there are places (and paces) I’ve never been able to experience while traveling with a group of 100 other people, and the Thriller hasn’t been there for many years, so…here we go. Hotel is already booked; we’re psyched!

We’re going to go with a much more loosey-goosey plan on this trip. Not even planning which show to see on Broadway; we’ll hit the TKTS booth in Times Square or at the Seaport and make our decision then. We’ll eat at La Mela in Little Italy, not because there aren’t other great Italian restaurants in Manhattan, but because I want to experience Little Italy while it’s still there. You can almost throw a rock from one end to the other right now. So sad.

Once the tallest building in the world.

In all my trips to New York, I’ve never been to the F. W. Woolworth building, which features some of the most opulent architecture in the city. It might be worth the extra dollars to get a one-hour, private tour. What say you?

Of course, the Thriller wants to see the 9-11 Tribute Center, which I talked nonstop about when I got home last month, so we’ll spend some time in Lower Manhattan before hitting the Ferry and heading back to Jersey for the night. We’ll also carve out some leisurely hours at the Met Museum and Central Park (I do want to have lunch or a drink at the new Tavern on the Green). The other four boroughs aren’t out of the question, either. Wherever the mood and our train pass lead, we’ll go.

Everything else is up in the air. After NYC, we’ll swing down along the Jersey Shore and spend a day or two in Atlantic City, since the Thriller has two free nights at Caesars. We might hit Gettysburg again on the way home, and see some things we didn’t get to see last time through.

So, what are your plans for the summer? Anything fun? Right now, I’m just looking to get through the 19th. After that, it’s smooth sailin’.

Summer plans … I forgot all about those. I miss them.

Aw, bummer, mate. Maybe in another 15 years or so, when you’re slowing down (or at least thinking about slowing down), summer might open up a bit for you. Me? I’m just tired of being nose to the grindstone all the time. Too old to go 365 a year, and too young to want to give up!

Sounds fun!!!! I have a friend that was in NYC (he’s a theater person) and they saw Rocky. He said it was FAB. Made him cry. But then I saw Alan Cummings on Jimmy Fallon doing some of his act in Cabaret and then a few days later on Jimmy’s couch to be interviewed. THAT would also be a great show. Just sayin’.

Summer plans. Niks nada nuttin’ . Work. Save money so I can come see Mom in the fall. Fun times.

I actually looked at Rocky! That could actually be a “go” for us. And even though I’m not a big Disney fan, I’ve heard some fantastic things about Aladdin as well! I’d love Cabaret (not sure what the Thriller would think, though), though I’ve seen that a couple of times — albeit not on Broadway.

We need to make a Michigan connection one of these trips. Oh, and wait till I tell ya what we’re planning for two-three years from now…wow!

Ohhhhhhhhh???? Does it possibly involve a plane??

I am excited and happy for you and Thriller doing some time in NYC; it is such a fantastic town to play in! Last time I was there Liz and I saw Lion King, 2nd row center…I think I grinned the entire first hour. Love Little Italy, the food, energy and the architecture is everywhere! As a city it is only topped in our opinion by San Francisco as a favorite place!
Cannot wait to see the pics and hear the stories Ms. Fink!

p.s. If you need any restaurant recommendations let me know…have lots!

And don’t you know, we’re going to be at that same theater on 29 July — in a box! It was actually one of the cheaper options. We’re stoked. I sat in box seating at the Cleveland Opera once, many moons ago, but it was for 8 people — this one at the New Amsterdam seats only 2. Hoity-toity! I, too, love Little Italy. I just wish it wasn’t disappearing. One of my favorite restaurants (Sal Anthony’s SPQR) couldn’t afford the ridiculous rent hike, and closed. It’s now a year-round Christmas mart. ???????? Post any ideas — I’m up for… Read more »