What a great day we had yesterday. The weather was supposed to be borderline terrible, but it ended up being a beee-yootiful day in Manhattan (and Brooklyn and Staten Island). We walked and climbed and climbed and walked — almost nonstop — for 10 hours. Needless to say, it was great to hop on the New Jersey Transit bus back to the hotel when the day was done.

We began by purchasing the keys to unlimited travel in the five boroughs — the Metro Card. Unlimited fares for a week, on the subway, the bus, the tram — anything affiliated with the New York City public transit system. They proved to be totally worth the money ($30 each). 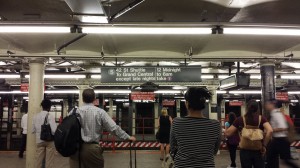 The subway stations were relatively not filthy. Just like you see in the movies, there are a gazillion people, all in various stages of hurrying, waiting to go somewhere. It’s a great vibe. 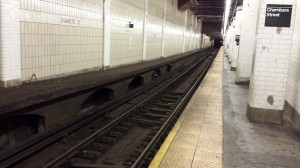 Waiting for the train to arrive. It’s easy to see why some people fall, or jump, or get pushed. By necessity, there are no “guard rails” to keep people away from the edge. You just have to use your head. 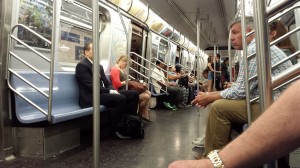 The trains are well-lit in the black tunnels. Etiquette states that you sort of stay to yourself, and not make too much noise.

After walking around Grand Central Terminal (the Thriller had never seen it), we took the E train — in the sweltering heat — to the financial district, where we had cheesecake and carrot cake for lunch

at the Essex World Café. Then we reported to the 9/11 Museum, for what was a sobering and pensive tour of the physical remnants of the 2001 disaster.

It is amazing to consider the overwhelming power the planes’ impact had on concrete and steel designed to withstand earthquakes and tornadoes. The tour guide explained that although the skin of the building was fortified with fireproof material, no one in their wildest dreams thought that any fire would be caused by exploding jet fuel. Heartbreaking. 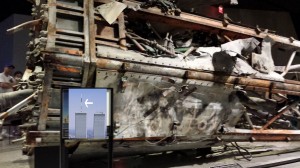 A section of the transmission antenna that plummeted to the ground. 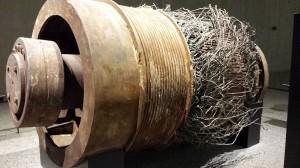 An elevator motor with its wiring completely frayed. 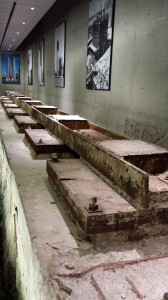 This is a part of the base of the South Tower, still in its original place. 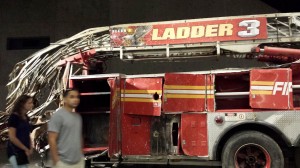 Ladder truck #3, FDNY. The entire cab was sheared off by the falling tower. Company 3 sustained the most casualties of any responding unit on 9/11.

We saw personal survivors’ accounts in writing and heard them on audio. We talked on the way out about the fact that if this event is seared into the minds and hearts of Americans in general, it is impossible to understand its effect on the families of those who died that day, and those who were left behind. Powerful experience.

The subway then took us to Brooklyn, where we struck one item off the Croak List and walked the mile-long Brooklyn Bridge back to Manhattan. 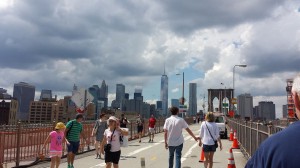 It was starting to really cloud up, and we thought we’d need to pull out the umbrellas. 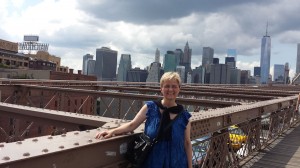 Slowly, the skies began to clear up. We were delighted!

By the time we reached the small park at the foot of the bridge on the Manhattan side (where we stopped and got some smoothies), we felt like we were walking on our tongues. Still, we had some time left in the day, and I really wanted to do the Staten Island Ferry at night, but…we knew we were about out of gas, and it was dinnertime already. The heat really took it out of both of us, sorry to say. The weather was delightful by that point; it had cooled off to a perfect 78 degrees, and there was a completely uncharacteristic breeze in the city. But the morning and early afternoon just zapped us, so we decided to ride the ferry earlier rather than later. 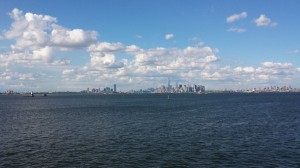 The clouds blew away, and it was a gorgeous late afternoon on the Hudson. 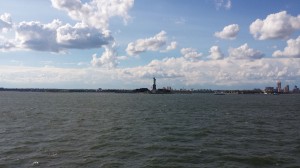 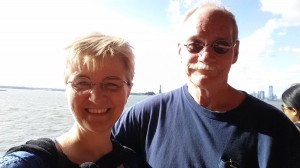 There she is again, photo-bombing a couple-a dorks.

After the ferry, we had dinner on a park bench, featuring Nathan’s Famous Hot Dogs and the absolute most outrageously delicious French fries I’ve ever eaten.

I should include at this point that we didn’t intend to eat at Nathan’s (located inside the Whitehall ferry terminal), but the Thriller’s Metro Card didn’t scan properly at the subway station, so it forced him to wait 15 minutes before he could re-scan at the turnstile. Rather than stand there in the stuffy station, we decided to go topside and get some grub. Turned out to be a great decision; it was a yummy diversion.

So that was our Monday. Today is going to be just as crazy. Can’t wait!

Thanks for following this nutty adventure with me.

I was just wondering if you were missing the one hundred and six other people that were with you last time? Just kidding! Certainly sounds like you’re having an incredible vacation, and I appreciate you sharing your journal with us.

That topic has come up in conversation many times over the last two days, Tricia! It was weird being there without 100 of my closest friends, and I missed it!

I wish I could have the choir do some of the things we were able to do (especially public transit and having lunch at Bryant Park). Hopefully, they’ll go to NYC on their own someday and experience all the other things the city can offer!

Love the pics! It is not a trip to NYC without at least one Nathan’s hot dog; how fun to follow along with you and Thriller.

Thanks for the wonderful pictures. I loved the SOL photo bombing you caption. Glad you’re having a great time and that the weather is cooperating. Wow — miles of walking!

Miles and miles and miles…I think I’ve lost 5 lbs. *HUGE THUMBS UP* And that attention hog statue — we couldn’t go anywhere on that boat without seeing her somewhere.

Wow photo bombed by The Lady herself, y’all must be speshul! hahaha I hope the weather cooperates the whole time,
NYC is beautiful!

It is beautiful! One of my favorite cities, all-time. The weather could not have been better — we were delighted. Below-normal temps (78), and not a single drop of rain, even though it was in the forecast. Awesome!

Just great pictures, guys! Like always, I feel like I’m right there with you. Bird, you should write a travel book. Seriously. Can’t wait for more pictures!!! Miss you guys!

Mave, I could probably write a travel book of everything that’s gone wrong, lol — but we sure have done the trial-and-error thing on road trips, and we’d definitely have some tips to share on what NOT to do. HA

Love you and miss you — see ya soon! We’ll be home on Friday afternoon/early evening.

Love seeing your pictures and reading about your trip to NYC. Brings back memories from this spring. Looking forward to doing it again in four more years!

You guys have (at least) one more of these monsters to do with me!! I sure hope Aladdin is still playing. The kids would LOVE it.