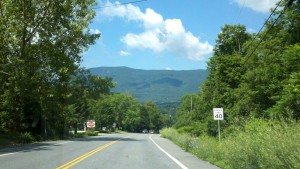 The Green Mountains of Vermont
We saw some pretty sights in Vermont and northwestern New York yesterday. The White Mountain National Forest in New Hampshire gives way almost immediately to the Green Mountain National Forest in Vermont, so we’ve enjoyed nonstop greenery. I can only imagine what this looks like in the fall. It’s been a beautiful drive, and good thing, too, because yesterday was our longest trek: nine hours on the highways, and fortunately, only sometimes on the interstate. 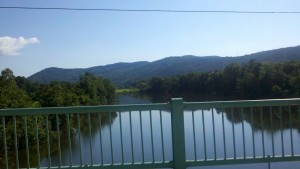 Rural New York
These pastoral settings were everywhere. The Thriller stopped the car in the middle of a bridge so I could take a photo without the railings appearing to lean sideways (I wanted to get out, but there were cars coming). These vistas are everywhere, and we wondered if the residents didn’t come to take them for granted. I hope not. 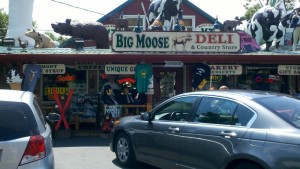 Just across the New York border sits the town of Hoosick, home to PumpkinPalooza and this awesome place. Notice the ghostly presence of a familiar spectre, posing in between Jake and Elwood on the front porch. We checked it out inside as well, and bought the best oatmeal raisin cookie we’ve ever eaten.

So today, it’s on to Letchworth State Park, then five hours on the western road. We should reach the homestead around dinnertime tonight. We are both tired, but happy. It’s hard to not think about things waiting for us when we get back, like work.

And you will notice I have completely avoided even the slightest mention of Dinner Theatre this entire time.

I am, however, back to knowing what day it is. Happy beginning of the work week! Some final reflections tomorrow morning, along with the customary dirt on Odyssey 2013.

Such a wonderful vacation you’ve had! All the photos make me long for the mountains even more. I have loved “blogging along” with you for the entire trip! I hope that this trek has brought much serenity and relaxation into your busy lives. It will be good to have you home!

“And you will notice I have completely avoided even the slightest mention of Dinner Theatre this entire time….” , until now. Glad you’re coming home! Will have a trek soon down your way, maybe even tomorrow. I’ll let you know.

Pretty sure my hubby wouldn’t have been able to pass up a visit to the Big Moose, Deli & Country Store! Loved the picture of your hubby between Jake & Elwood on the front porch. Made me chuckle.