Cuz this ain’t about politics.

I noticed these images on a couple of blogs yesterday, and followed some links. It’s amazing (and gratifying) how visual art, after several millennia, still moves people to all manner of emotions.

A gaggle of different feelings will serve as reactions to the following picture. (You know the Law, so I ain’t interested in what those particular reactions are for you personally, or why. Just be nice and play my little game for today, k?)

Maybe this evokes less of a “convicted” response. I think it’s funny, myself:

Art has been controversial for centuries, but there was a time not too long ago when it was the only commercial visual stimulus available, and much attention was paid to its viewing, criticism and social commentary. I like art history — especially the periods which coincide with music history (Medieval, Renaissance, Baroque, Classical, Romantic, Impressionistic, Contemporary).

I won’t go into the whole of it, as I’d be writing all day instead of planning my glorious return to the school house, but imagine the shock of looking at this painting up close, when you hadn’t been raised on watching realistic reenactments of it on television: 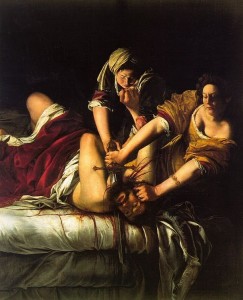 Artemisia (yep, a girl) painted several versions of this scene, over and over. Traditional misinformation classifies the painting as channelling the artist’s personal revenge against the men who humiliated her in her lifetime (she has an interesting story if you ever want to search it out), but in fact she maintained a closeness to the real story of Judith, who performed this grisly deed on an enemy general to scare his troops into retreating and leaving her people alone. Therefore, it’s more an indictment of tyranny than a kicking, screaming fit against the misogynistic ruling class of the day.

Still, look at the determination on the women’s faces. Then look at Holofernes. How do you think the men of 1620 Italy reacted to it? And the women (though likely in secret)?

Did I mention I like visual art? It was the subject of one of my very first posts here at RtB. I could talk about it all day, really. Alas…

I found this quote from Artemisia herself:

An artist’s feeling is the white-hot core of painting…You’ve got to use your own emotions and paint with your own blood if need be in order to discover and prove the truth of your vision.”

If only we all felt that way about our own visions, eh?

2 thoughts on “Now don’t go gettin all riled up.”