Strike another state off the list. Only two of the lower 48 remain for the Fink to set paw in: Washington and Oregon. Until yesterday, ND was on that list as well. Yippy! 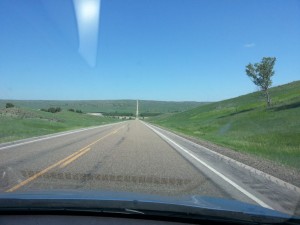 Carry me baaaack to the lone prairieeeeeee

We slept in a bit yesterday morning in Murdo, and had a leisurely breakfast. I went for a swim an hour or so later, and then we hit the road and eventually crossed into North Dakota, which, of course, looked like this… 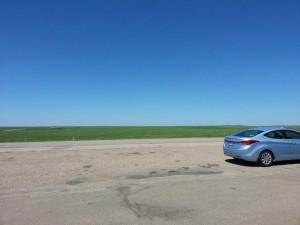 We constantly observed how this land must have looked to the Indians (and later, the squatters known as the United States Federal Government), and marveled at the fact that in thousands of years, it is largely unchanged.

I think I counted exactly two towns in a 100-mile stretch. That’s a long time between potty breaks, lemmetellya. Well, we found a small gas station/post office at a lonely intersection in the middle of nowhere. The photo with the Finkmobile is the view from the entrance. Just prairie, truly as far as the eyes can see. Pretty!

But I have to backtrack a moment, fiends. Let’s go back to South Dakota — actually, back to the 1880s.

We left Murdo, and about 15 miles down the road was a place called 1880 Town, where buildings and artifacts from the post-Civil War era have been lovingly preserved and on display to travelers for many years. We are so glad we decided to stop! What an amazing place. 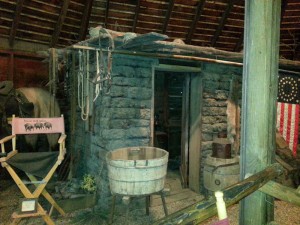 The Dances With Wolves display was impressive. I don’t know how this nice old man named Jake and his wife came to own this huge collection of props from the 1990 film, but they have a bunch.

The coolest part was walking down the street and visiting the various restored — and in some cases, unrestored — buildings. And this isn’t some manufactured, made-up diorama; these are actual structures from the Civil War period, including a beautifully preserved saloon. Awesome stuff.

One thing’s for sure: I’ll never complain about my classroom or my kitchen ever again. 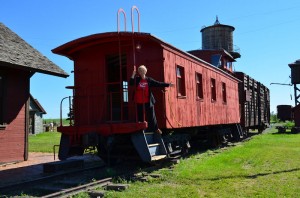 They also had a couple of trains — one of which was an authentic 1950s diner! We didn’t eat there, but walked through it and took photos. Ah, too many photos to post this morning and not enough time. We need to get breakfast, showered and on the road to Teddy Roosevelt National Park, where we’ll spend some time hiking around.

More reports from the field tomorrow! Hugz to you all.

YAY! I was so hoping you could stop and tour, 1880 Town! I wanted to see pictures of that place SO badly! Thanks for taking these wonderful photos, guys. I bet you had a great time! Can’t wait for tomorrow and the new blog post!

There are so many more pictures…we will have us a sit down when I get home. You will love the place!! The pictures don’t include the smells and sounds. Just unbelievable…we were really “transported.” Totally your kind of place!

Thanks doll! I think South Dakota is one of my favorite states ever. It was my third time there, and I still found new stuff to love. But hey, I’m thinking about you and your upcoming excitement!! (Opera voice) Laaaaaaaaalalalalaaaa

Wowza you be drivin’ fools!! It sounds like a fab trip so far

It’s been a great trip! We’re getting to the point where we’re whining about the shortest of drives…we just want to “get there.” But we love the road trip experience. Ozzum! (Wish you could go see Le Tour this year…)