…at least for a while.

Yesterday’s gamma knife procedure went very well! Michael’s main anxiety about it all was his inability to lie flat for any length of time. As we feared, the MRI didn’t fly. So they did a CT scan instead, and we were off and running. 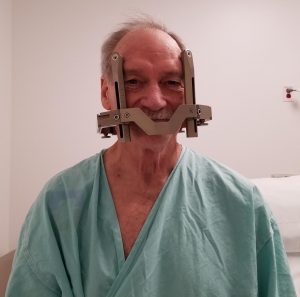 It’s a peculiar device, this frame, and not without discomfort. But the Thriller cooperated with good humor and a positive attitude. I can’t say enough about the staff at the CC Cancer Center. Not only did we not have to wait to get things rolling (they ushered him right in at check-in, and came to get me a few minutes later), but they were beyond attentive to his every need.

Once they scanned his brain, he was free to eat and drink — something that was a bit tricky. I went to the cafeteria and bought a banana, but seeing as how he couldn’t feed himself normally with the frame on, I had to break it up in little pieces. We also got creative with his coffee.

Before his procedure, one of the four frame pin sites got pretty ouchy for him (click here if you’re not ooky about blood), which was somewhat of a big deal, given that his pain tolerance is quite high. When he complains, you know it’s bad. He wasn’t going to say anything, but that’s why God made Rat Fink. As soon as I informed our nurse that he was in some discomfort, she was back within a minute or two with a syringe full of Lidocaine and two Percocet. Is that service or what?

He took all the meds without protest, and I think they really helped him through it.

It was all over with in a few hours, and they sent us home with steroids (to minimize risk of brain swelling) and instructions for incision care. He didn’t sleep well for the aching head last night, but when I took his bandages off this morning, the wounds looked much improved. He goes back in 5-6 weeks for another brain scan to see how much the tumors have shrunk. I hope they all went to Jesus quickly, never to return.

We start chemotherapy on the 7th. We’ll do the first one in Cleveland, then maybe arrange for a closer location for subsequent treatments. We should also hear back from the DNA people about the likelihood of Michael’s involvement in the Keytruda clinical trial. Waiting, waiting and more waiting. Still, one hurdle has been jumped with this gamma knife business. Now onto killing the junk in his lungs and lymph nodes. Release the Kraken.

23 thoughts on “No more knives”