It’s an interesting story, and unfortunately, completely believable on all sides. So what really happened to the Tucker Automobile Company?

Preston Tucker (1903-1956) was a car nut and entrepreneur who wanted to cash in on the post-World War II glut of factories and steel being sold off at a discount by the US government.

His mission: build a car that would be sporty, powerful and affordable. He hired a designer and gave him exactly one hundred days to come up with an idea.

What ensued was a period of what could be seen as Teslian setbacks; that is to say, the man had some innovative ideas that presumably posed a threat to the “Big 3” automakers, like rear-mounted engines, disc brakes and fuel injection. Many think that Ford, GM and Chrysler conspired to shut him down. If that was the case, they succeeded. He was out of business in little more than 2 years. 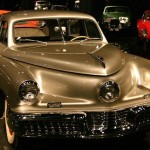 The story centers around this car: the Tucker 48. Of the 51 made, 47 still exist and are on display all over the country. [This one is at the Blackhawk Auto Museum in Danville, California.] Click the photo for a better view.

In order to raise cash, Tucker sold parts, accessories, and even dealership franchises — before the car was even in production. Somebody tipped off the Securities and Exchange Commission, and the investigations began. [A version of the story can be found here, interestingly, at the Henry Ford Museum site.] Tucker was indicted but acquitted. The shame of it is that it was all too late; by the time he was declared innocent of any wrongdoing, his company was bankrupt.

He died of lung cancer a few years later, while working on a new design to be produced in Brazil.

There have been several theories postulated about what transpired behind the scenes. Why is it that the newspapers knew about Tucker’s SEC indictment before he did? Why was he reportedly able to trace money and influence relating to his demise back to Big 3 higher-ups? Why he didn’t go for broke and name names in this open letter to the public in the New York Times, I don’t know. [Ok, there is that little issue of slander.] Confusion persists to this day about the whole affair. 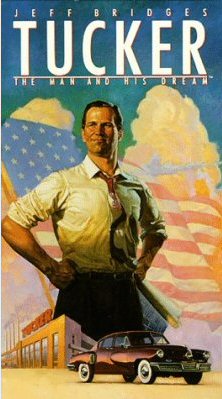 Years ago, I remember seeing a movie called Tucker: the Man and His Dream, with Jeff Bridges in the lead role. I can’t remember a whole lot about it, except that it was a Francis Ford Coppola thing. I might need to rent it. What I do remember is that Tucker was depicted as a victim, and indeed, maybe he was. The SEC had egg on their faces because they couldn’t produce a shred of evidence against him. But if the prevailing conspiracy theory is true, they got what they wanted, which was Tucker out of the picture, and out of the hair of the auto makers whose money lubricated the machinery of more than a few Washington offices.

So there you have it. Another story of a regular guy, trying to make it in this world by building a better mousetrap, only to be cornered and choked by Big Brother. Or not. Still, it’s interesting reading. I might try to find a book about him.

Speaking of books — I just finished the first book in the “Anita Blake” series by Laurell K. Hamilton. Ka-reepy.