Yep – every 40-something out there is going, “Hey, that sounds familiar.” It should – especially if you were an HBO subscriber back in the eighties. 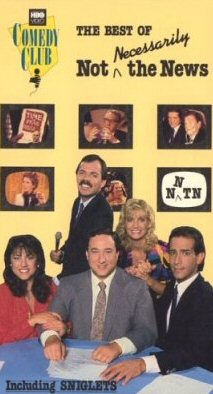 Remember Not Necessarily the News? It made a college campus circuit star out of comedian Rich Hall. It’s also where Conan O’Brien cut his writing teeth – it was his first professional job. Stuart Pankin and Mitchell Laurence also got their comedy starts on NNTN.

It posed as a news show – a format that’s been copied over and over since the earliest days of Saturday Night Live. The only bad part was that you had to have a subscription to HBO to see it. Anyway, the part I always looked forward to was Rich Hall’s segment on “Sniglets,” which featured totally made-up words that had hilarious meanings.

The guy’s a literary wizard – or at least one amazing wordsmith. I was jealous of his talent to think up words out of the air. Here are a few:

Cinemuck – The combination of popcorn, soda, and melted chocolate which covers the floors of movie theaters.

Begathon – A multi-day event on public television, used to raise money so you won’t have to watch commercials.

Glackett – The noisy ball inside a spray-paint can.

Cheedle – The residue left on one’s fingertips after consuming a bag of Cheetos.

Intaxication – Feeling of euphoria at getting a tax refund, which lasts until you realize it was your money to start with.

Prestofrigeration – The peculiar habit, when searching for a snack, of constantly returning to the refrigerator in hopes that something new will have materialized.

There are hundreds of them – more can be found here. 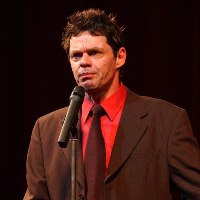 Interesting aside about Rich Hall. He was the model for the character “Moe” on the inane and consummately stupid piece of tripe, The Simpsons.

Hey, yall have a good day, now. I’m off to the school house.