Last Saturday, Kim Peek died at 58 years old. Known as the inspiration for the film Rain Man (which won the Academy Award for Best Picture, and earned Dustin Hoffman a Best Actor Oscar), Peek inspired the medical community as well. Theories regarding his savantism (although he is not thought to have had autism) and his astonishing ability to store and recall facts abound, though not a whole lot is known.

According to the article in the New York Times, Kim was amazing his family at a very young age. Dismissed by doctors in the mid-1950s as profoundly retarded, his father knew better. By the age of six,

‘Kim had read and memorized the first eight volumes of a set of family encyclopedias,’ his father said. He received part-time tutoring from the age of 7 and completed a high school curriculum by 14. He spent great swaths of time absorbing volumes in the Salt Lake City Public Library.”

The journal Scientific American did a feature on him in 2006. In it, they said:

He knows all the area codes and ZIP codes in the U.S., together with the television stations serving those locales. He learns the maps in the front of phone books and can provide MapQuest-like travel directions within any major U.S. city or between any pair of them. He can identify hundreds of classical compositions, tell when and where each was composed and first performed, give the name of the composer and many biographical details, and even discuss the formal and tonal components of the music. 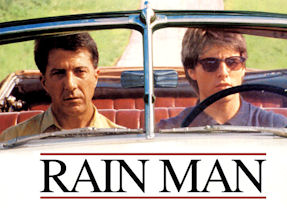 Of course, someone always has to cast a pall; throw a monkey wrench; pee on the birthday cake. The Daily Mail paints quite the different picture of the level of inspiration Kim actually provided the star of Rain Man, Dustin Hoffman. Reportedly, Hoffman remembers little about their initial meeting, and counted Kim as only one of several “inspirations” that contributed to his development of the Raymond Babbitt character.

No matter. It still doesn’t cancel the “amazing” factor. If I can tell someone my birthdate, and within one second, he tells me the day of the week it fell on and what the weather was like in Zion, Illinois, well, I’m impressed.

And the blackjack scene from the film still makes me laugh. Interesting trivia here. Cool.

Wow. I just watched this last night. What an amazing man.

He was indeed! I couldn’t believe there were actually people who, when seeing someone spill an entire box of toothpicks on a table, knew the exact count in a half second. Blows my mind.