OK, first — the beignet thing. I mentioned on Facebook yesterday that they were “meh,” and much like some reactions I’ve seen from my seafood-loving friends who are quite — shall we say — freakishly enthusiastic when confronted with people whose taste preferences differ from theirs (“WHAT? YOU WON’T EAT OYSTERS? YOU’RE NUTS!!!”), I expected an upbraiding from beignet devotees. Turns out, the blowback wasn’t bad at all.

Seriously, since we’re trying to cut down on sugar, we planned to get one beignet and split it. I was going to brush off the inch of powdered sugar they put on top and just try the pastry to say I’d tried one, and the Thriller was going to finish the rest. Unsure about whether we’d encounter capacity crowds at Café du Monde again, when I called room service to order a pot of coffee, I asked for one beignet to be sent up as well. ONE beignet. They arrived with this. Of course, after I’d had my “bite” and posted my reaction about it, I found I couldn’t let all that breakfast just sit there, so I ended up trying more of them to see if they “grew” on me. Big mistake. When you’ve been off sugar since June…anyway, after recovering, it was off to our busy day. 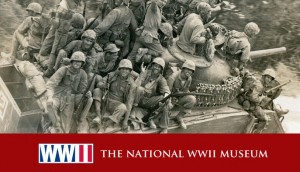 There is a reason why the World War II Museum ranks #1 out of 478 on the list of “things to do in New Orleans” at TripAdvisor. If you ever visit NOLA, this venue must be on your list of things to see. It would take much longer than what I have this morning to list all the reasons your perspectives will be challenged (and changed) after seeing it, but trust me: see it you must.

Suffice it to say that if the United States military, FDR and Congress were worried only about avoiding American casualties, our country would be quite different today. Of course, this was a different time and Hitler declared war on us, but had he and Mussolini been treated diplomatically, the USA we know today — warts and all — would not exist. Sixty-five million military and civilian lives were lost from 1939-1945 worldwide; the film we watched, the interviews and interactive pieces we heard, the photographs and the artifacts we saw drove the point home over and over: this war couldn’t have been conducted any other way with the end result being the defeat of Germany and Japan. I was in tears at the end. It took several hours to see what we saw, and we didn’t see everything. 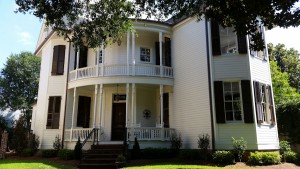 One of many beautifully maintained Garden District homes

Afterwards, we took a taxi back to the hotel and mapped out our Garden District walking tour. This neighborhood of historic homes large and small, just minutes from the crazy downtown city streets, is so quiet you can whisper to each other on the sidewalks and still be heard. It was a beautiful day to stroll down street after street and admire the architecture, while imagining what it might have been like to live here in the 19th century. They have withstood war and fire and weather, and most are just as beautiful now as the day they were built. 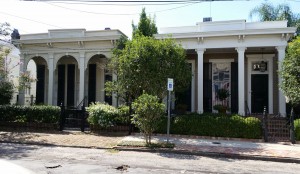 Two of the “Seven Sisters” homes

We had the taxi driver drop us at Prytania Street, where we walked for an hour and saw dozens of beautiful houses. The Seven Sisters homes (near-identical houses, built next to one another in “shotgun” style, meaning that if one fired a shotgun through the front door, the shot would exit the back door without hitting anything) looked like the kind of places I could easily make my retirement home.

Of course, I had to see Anne Rice’s former home, bringing back memories of the Mayfair and Lioncourt families in her novels. It was a great experience, and even though it was 94 degrees and sunny, we did fine — that is, until we had the bright idea to just hoof it back to the hotel instead of calling a taxi. (What were we thinking?)

We made it 1.4 miles before stopping at the 1940s-themed Soda Shop 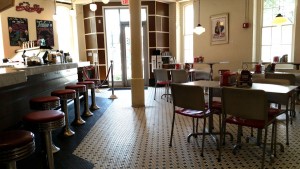 , located at the WWII Museum, for a drink before we both fell down. Neither of us had a real idea how totally gassed we were until we sat at our booth with Cokes. With over a half mile to go to Harrah’s, the Thriller decided to just hail a waiting cab outside the restaurant, and we arrived safe and sound back in the air conditioning by 6 p.m. I was fine with that. 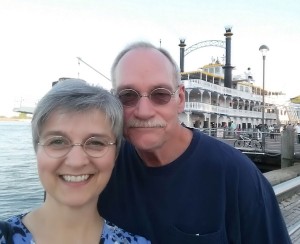 Selfie in front of the Creole Queen

After showering off the dust of the road, we walked a few paces down to the river, did a little shopping at the Riverwalk Outlet, had a light dinner at Poppy’s at the Port of New Orleans, and took a stroll down the shoreline, after which we played a bit in the casino, came back upstairs, and crashed. What a day!

Today, we plan to go back to the French Quarter, do some shopping in the Market, and check into our new hotel for our final day and night in New Orleans. It’s been a blast. More tomorrow, and thanks again for following along!