Greetings from “[dozen different names for New Orleans]!” We arrived yesterday late morning and hit the ground riding and walking. When we finally got back to the hotel (we’re at Harrah’s again, since you can’t beat free) in the evening, we walked the street (Fulton Alley) and took in the party atmosphere. What a fun place. 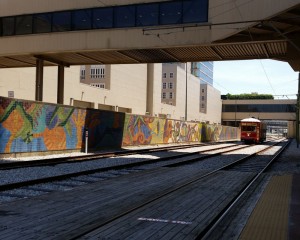 After dropping off our bags and our car with the bell captain, we toured the grounds and hung out at the casino until our room was ready. After checking in, we hit the bricks for Poydras Station down the street, which would take us to Café du Monde, where we planned to eat a beignet and have some of their famous chicory coffee. After that, the afternoon was pretty much open to what looked good at the time.

We boarded the streetcar and found the only remaining seat, behind a cutie pie of a fellow passenger. We started down the tracks, and stopped at the next station — which was where everything kind of went a bit sour. They kept adding riders and adding riders, and when we thought there was no possible way any more bodies could be pressed into the train car without people suffocating, more riders got on. It was worse than any NYC subway ride I’ve ever taken. Ridiculous, actually, and on a streetcar with no air conditioning on a 90-degree day.

Now I’m no prude, and I have been in many situations where my personal space was invaded and I did fine, but this was exceptional. Fortunately, I was able to just lean out the window a bit and watch the track ahead. The entire ride (actual moving time) only lasted a few minutes. The rest of the time was spent stopping to load up the burgeoning sardine can. I think we decided at that moment to be happy with experiencing a streetcar in NOLA once, and we’ll walk it or taxi it from now on, thanks anyway.

The streetcar deposited us in the Quarter, and we headed to Café du Monde to have some coffee and a beignet. Well, that didn’t happen. The place gave the streetcar a run for its money. Bodies writhing everywhere, all wanting to have lunch, and the takeout line ran the entire length of the place. We decided to postpone the trip until Monday morning, and instead went to the CdM Company Store and bought some nice things. 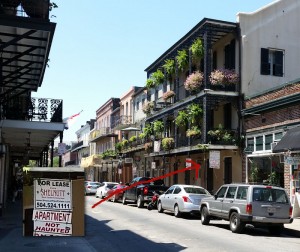 Inset is an enlargement of the sign, listing the apartment as “not haunted.” We saw several of these signs that listed flats as “haunted” as well.

After shopping, we walked the area and visited Jackson Square and St. Louis Cathedral, where photography was forbidden (but people took pictures and video with impunity anyway). Fascinating. We loved the “oldness” of the architecture, and the endless iron balconies and flowers and places to eat and drink outdoors. And speaking of eating…

In the last 18 hours, I think we’ve each gained ten pounds. The food, the food. It’s wonderful.

Most of you know that I am not a Creole foodie; I generally avoid sea creatures (other than tuna, salmon, haddock, and other mild fishes), and definitely don’t dig spicy stuff. Fortunately, there happens to be plenty of other tasty cuisine to be enjoyed in New Orleans, and I availed myself of it when we visited Dickie Brennan’s Tableau restaurant in the French Quarter. 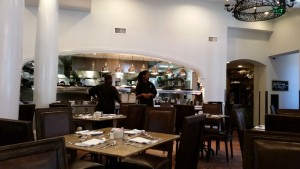 View from our table at Dickie Brennan’s Tableau

We happened upon the place quite by accident, after looking in the windows of several bistros and cafés and finding them crowded to the ceilings. After looking at the menu, we went inside and were greeted and seated immediately. It was a cool, friendly place, and not crowded at all. It was going on 3:00 by now, and we hadn’t eaten since 7:30 a.m. Time for chow. 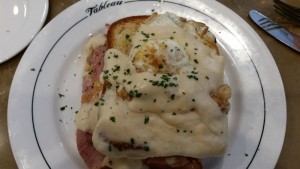 Oh, my. I had the Croque Madame, and this madame could have croaked. Shaved ham and Gruyère on brioche with a fried egg on top, and covered in delicious mornay sauce…who says it has to be spicy seafood to be awesome? The Thriller had their signature burger with Gruyère and veggies, and the homemade pommes frites. We floated down the street, like great huge blimp-things.

Today, we’re starting off with a visit to the National World War II Museum. After that, we’ll go see the cemeteries, Louis Armstrong Park, then…who knows? We’ll find some trouble to get into. And food. We’ll find food.