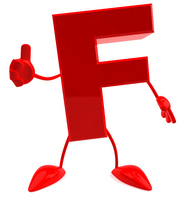 How about a big Fink thumbs-up.

You know how they have Farm Town and Mafia Wars and Fairyland on Facebook? I say developers should come up with a wacky new app. Call it High School Theater.

Hey, I need a lead who’s not sick. Anyone got one?

Yo. I need a swine flu vaccine over here. Hit me up. Willing to trade.

Wouldn’t that be fun?

For the first time in our careers, Stoney and I are being forced to at least have a conversation about postponement (NOT PLANNING ON IT — you know how rumors get started in our little village — just discussing it). We’re not like other, bigger, likely Kool Kid schools. No such thing as understudies out here in Hooterville. Haven’t spoken at length with our boss about it yet, but since we have one lead already sick, and who knows who in the on-deck circle, life could get really interesting around about Tuesday. My boss has a line when crazy things are going on in the office: “Don’t you wish you were me?” I think I can speak for Stoney and ask all Finkites the same question.

So today is the marathon tech rehearsal. All you theater types out there know what kind of a day lies ahead. Coffee and donuts at 8; rehearsal at 9 until 3. Various and sundry meltdowns in all manner of style and intensity. Three directors pulling out their hair (and one really can’t afford that). Sound, lights and full costumes for the first time. Bliss.

And speaking of donuts…gotta get ready so I can be at the bakery at 6:30 to pick ours up.

But hey, look on the bright side. At least it’s pouring down rain and 40 degrees outside. THUMBS UP!

Have a good Saturday, fiends. I don’t think I’ve ever looked forward quite so much to coming home from school and being chained to the box. Heh.

I have to work 9-5 or I would so steal half a doughnut and watch events transpire knowing that, “Hey she cannot throw anything at me.” *ducks*

Now David, I never threw anything at you. Or did I???

Postponement?! *cricket* *cricket* Unheard of! That would definitely make it to the front page of the “Hooterville Daily”. You just make sure YOU aren’t one that gets sick, missy. Just think of how fun it would be to have Mavis taking care of you night and day. THAT should get you wearing a mask to school! :0)

Seriously though, hope everyone gets healthy. The show must go on!….cuz Mave has been SO looking forward to seeing it. ;p~~~~~~

I think we have a good show for you; I hope you won’t be disappointed! *HUGZ*

You never got us doughnuts way back in the day. *Faux-hurt*;p

I most certainly did, William! You just don’t remember. OK, maybe not the first couple of years, but we got wise by the time you graduated.

Will
Reply to  Rat Fink

Oy, I’m a dufus. I just remembered that. Wow, I must be slipping in my old age/way too many years of college.

Aww. How I miss Saturday tech rehearsals. Donuts, yelling, 10 minute naps backstage. Also, I’m working on a swine flu vaccine. No luck yet, though. I have had miraculous breakthroughs on my camel, pigeon, and starfish flu vaccines, though.

Well throw some of that vaccine our way, Kody. Lord knows we need it about now…for many different ailments. HA

I fear for the future. What is next week going to bring? (Post-show, of course!)

Garsh and I missed all the fun! I hope you survived and that everything and everyone is ready!!