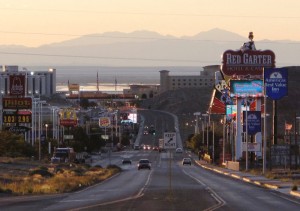 What looks like a lake on the horizon is actually just salt pan: the remains of ancient Lake Bonneville.

OK, yesterday. Umm. Haha. West Wendover is a small (population 4500) town near the Utah border, which pretty much explains why it’s little more than a conglomeration of casinos. (Gambling is illegal in UT.)

Outside of fast food, gasoline and gambling, there’s not much there. The Bonneville Salt Flats are 5 miles to the east, so we’re hitting that this morning. I will try to keep the Thriller from racing across them to speed-test the Finkmobile.

So, with absolutely nothing else to see, we did a casino hop. It was surreal…the Thriller put it best:

It was like a scene out of Vegas Vacation, where Clark Griswold and his brother end up in a casino that had games no one ever heard of, and were impossible to win.

“Pick a number between one and ten.”

Ha. You get the idea.

So I can’t say we’re sad to see West Wendover in the rear view. And we’re getting a bit antsy to get home, too. We have long drives ahead of us from here on out (6+ hours each). At least they’re long for us. Still, we hope to see some interesting things along the way.

As long as it’s not this.