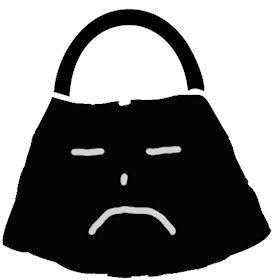 No, seriously. Check this out.

The Thriller and I arrived at the Video Poker Room at Greektown Casino around 1 p.m. on Saturday. We played for about 30 minutes at a couple different locations, and then decided to go get something to eat. As we left, I performed the customary systems check (phone, purse, sweater, soda pop) and to my horror, the purse was AWOL. I immediately launched into Chicken Little mode, while the Thriller calmly said, “Let’s backtrack. We’ve only been here a half hour.”

Well, we backtracked and backtracked some more — nothin’. So we went to the security desk, and they asked me to describe it. Yes, they had it; one of the floor workers saw it and turned it in (yay for honest folks). Creepy thing: the supervisor they summoned told me, “You had $9 in your wallet. We have taken it out, and we’re giving you a voucher for $9 that you can redeem at the cashier’s cage. If you’ll just come with me, please.” I signed a form at the security desk, and they produced my purse from under the counter. Then we took a long walk, after which I signed two more forms at the casino concierge desk. Someone retrieved my voucher, presented it to me, led me to the cashier’s cage, and watched me sign once more to get my nine bucks.

I felt kind of ooky that they took the money out of my billfold, but undoubtedly, there are policies in place to protect the casino from nutjobs who might accuse them of ripping off patrons (beyond the standard, expected fleecing, of course). I’m sure it was a multi-part process, in that witnesses watched a security guard open my billfold and count the money, and a paper trail was blazed to prove that they gave it all back. A well thought-out plan all around.

Indeed, there are dozens of security measures built into the operation of a casino. If you look closely, you’ll see it. Not only are there hundreds of human eyes trained on cameras trained on every possible cranny in the building (not the bathrooms, I hope), there are human eyes out on the floor. Have you ever noticed how many suits trawl the table games pit? Or how, when a blackjack dealer arrives for his shift or gets a new rack of cards, he has to count the cards twice, in front of the pit boss, and clap and wave out his hands (called “clearing”) in front of the cameras to show he hasn’t palmed anything? All very interesting stuff, and there’s much more to it, but I’m getting off the subject: my purse’s no-good, terrible day.

So we had lunch and went back to playing poker. I usually keep my purse on the floor in front of me, with its long shoulder strap resting on my leg, and my feet on either side of it so I can always feel it. No problem. Well, I must have switched my posture somewhat on the cushy chair without repositioning the handbag, because the next thing I hear is the Thriller saying, “Hey — I think that guy just dropped your purse!” How he saw the thief I’ll never know, but he was right — this thug, who “dropped” his jacket on the floor next to me, scooped up my purse as he picked up his coat off the floor. While making his getaway, he lost his grip on it and dropped it, and the Thriller happened to see it.

Well don’t you know, after having lost my purse once already that day, I was having none of that. I jumped up and took off across the room after him (he only had a dozen steps on me). I said, “Yeah, I’ll take my purse back now.” He looked at the coat on his arm, produced the purse, and said, “Oh, sorry, it must have gotten caught up in my jacket.” Riiiiiiiiiight. I am normally quite nice to strangers, but I jerked the handbag from his greedy paw and walked away without looking at him, and he scrammed in the opposite direction. The Thriller was talking to a floor person who had already called the security manager. OH NO…NOT AGAIN.

Filling out paperwork, signing more forms. I had to give them my driver license for identification, and the Thriller gave them a description of the bad guy. The manager said they take this kind of thing very seriously. He radioed upstairs somewhere, gave our location, and told somebody to “back up the tape” to where the guy dropped his jacket. Again, proof that there is not a square inch of that place that isn’t watched. So don’t let’s go getting any hare-brained ideas.

The final insult: leaving with less money than we had when we arrived. Cripes. Welp, the adage is true: that’s why they call it gamblin’.

8 thoughts on “My purse had a bad weekend.”