Let’s see here. How shall I describe the latest felonious behavior of yet another in a long line of pro athletes who have too much cash and not enough gray matter? Hmmm. How about bizarre. Or you can come up with your own adjectives; I’m sure you will after reading the tale: 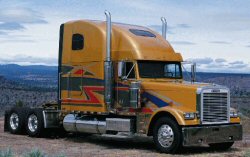 This is a Freightliner truck. Its cab is designed to hold four people. It was behind the wheel of this kind of truck that Miami Dolphins DE Randy Starks was found in Miami early Sunday morning, inching down Ocean Drive, in the company of not three other people (which would have maxed out the seating capacity), but thirteen — one of whom was sitting on Starks’s lap while he drove.

How do you cram 13 people in a truck cab designed for four? I’m still trying to wrap my reptilian brain around that little nugget, although according to the CNN report, police didn’t say whether or not Einstein was pulling a trailer. And furthermore – why a Freightliner truck?

Hey, I know. A party truck. Pull the trailer to a designated spot; park, party, binge/purge, repeat. Still doesn’t explain why the tags weren’t registered to that particular vehicle. Yikes. 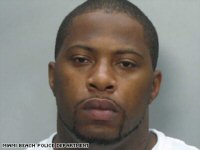 Anyway, Starks was arrested because he refused to stop when police chased him down in bumper-to-bumper traffic on foot, banging on the windows and commanding him to get out. (I can only imagine what that looked like.) One officer almost got pancaked between the creepaway truck and another car. Delicious.

Starks posted the pocket-change bail ($10K) and walked. Now what do you want to bet: I say he gets the customary hand slap and sent back to the practice facility. A slick lawyer will show up in court and wave a wand and say a pretty speech, and brother will dance off, scot-free. Because just like Manny Ramirez had no earthly clue that he was taking female fertility drugs, I’m sure Mr. Starks’s defense attorney will argue that li’l Randy had no idea that police officers were hanging off — and banging on — his truck’s doors, yelling at him to stop, and besides, if some fool cop didn’t want to get smashed, he shoulda got the **** out the way. Sheesh.