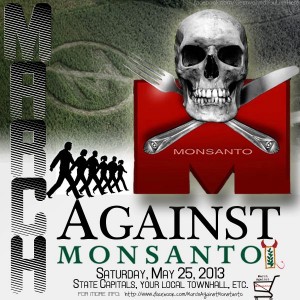 How fortuitous to have this post on Mothers Day (and HMD to all moms who chance to read my daily drivel. Hugs to you!).

Circulate this. Tell everyone you know. Make it viral.

I’ve never been one to harp on a “cause,” or try to mobilize an army against a thing. But Monsanto is trying (and on many fronts, succeeding) to make sure this trash goes in my grandchildren’s mouths. And I won’t have it. I won’t.

<insert rant on staggering increases in systemic disease and morbid obesity in the US over the last 30 years, and how Americans regularly consume agricultural products that other countries have banned>

So, see? The time has come to stop this monster from poisoning the citizenry in the name of billions (and billions) of Benjamins. And the lawsuits filed by people who’ve been poisoned? To Monsanto, it’s pin money; chump change. And there’s nothing new under the sun — except the Frankenseeds they’re planting in farmers’ fields.

J’ever wonder how they can spray RoundUp on a field full of soybean plants, and kill the weeds — but not the plants? Think about it. It’s been going on for years, right under my nose, and I never really grasped the extent of it before watching a 2008 video about it on YouTube yesterday.

If you ever in your life felt compelled to sit through a documentary, sit through this one. If it doesn’t scare you and propel you to some kind of action, either in thought or deed, then nothing scares you. And I don’t like that prospect.

At age 53, I am attending my first protest rally. I read on a graphic last night, “If you don’t think one person can make a difference, try spending the night in a bedroom with a mosquito.” Food for thought — and it convinced me. The Thriller and I will go to this rally in Akron on the 25th, and join with 600+ others to say we’re mad as hell and we’re not going to take it anymore.

Big Brother has come to the US in the form of the soybean and sugar beet. And that’s just the beginning. Will you join in the crusade? Who will be strong and stand with me? Find out if there’s a rally near you on the 25th. No kidding — look at the list. It’s worldwide, and that important.

On this Mothers Day, if you’re a mom, or if you had a mom, you need to absorb this information, and then get mad about it. And meet me in Akron on the 25th.