In what Variety calls an “eye-poking Three Stooges act,” Bill O’Reilly of FOX News and Keith Olbermann of MSNBC are still going at it. 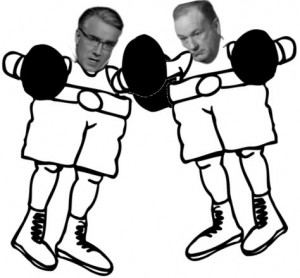 Spraying down the decks with testosterone, and trading endless “Oh, yeah? Well, take THAT!” barbs, their bosses have now been forced into it. Ladies and gentlemen, phone calls have been made. <<insert dramatic chord>>

Now don’t get me wrong. I concede that both of these donkeys are passionate about their beliefs. In fact, I used to like O’Reilly, back in the beginning days of his show. I thought that, for whatever his beliefs, he brought an unapologetic toughness that other interview shows lacked. But then he boarded the loony train. “Absolute power” and all that…

Same thing with Olbermann. He’s passionate, and most times, makes sense. But lately, his rants have become so personal in nature, he sounds more like a wackjob; out of control. It’s like, sweety, we know you think Bush is Satan, Stalin, H**ler, Mussolini and Dracula all rolled into one. Can we move on?

Both sides have their points, and they’re hired to air them. But then they muck it all up by playing what I call the “humanity” card. The “you’re not fit to show your face in public” (O’Reilly) and the “Worst Person in the World” thing from Olbermann. Slingin’ the mud, throwin’ the rocks. “You don’t think like me, so you’re sub-human and I hate you.” It’s ridiculous, truly.

I say that the discussion of two topics — namely, religion and politics — cause more animosity between otherwise civil and intelligent human beings than any other. Don’t you agree? They can so quickly and easily turn personal. That’s what is happening to Bill and Keith. It’s not about the issues anymore; it’s become a slugfest. Ain’t nobody winning this one.

Bottom line: Guys, it’s news. Granted, it’s important news and you’re paid to blather on about it, but it’s television, fuh cripesake. If I didn’t know better, I’d say that you’re both secretly enjoying this gargantuan elephant of a ratings grab…

But I know better, don’t I.