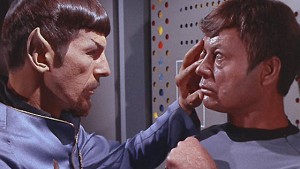 Someone needs to put the Spock down on my head. Maybe that would clear it out and make room for other stuff that requires my attention and gray matter.

Basically, it has begun. And by “it,” I mean the constant state of butterflies in the gut, leading up to the final week before the show opens. And this year, for several reasons, we are slightly under-rehearsed at this point in the run. It’s OK though. We’ve been there before and survived. And maybe it’ll provide me with a bit more focus.

I have called this “compartmentalizing.” You have this dresser or file cabinet in your head, see, and you store different issues in different drawers to pull out later when you need them. Thing is, my internal dresser tends to look like my *real* dresser after a busy week: stuff hangin’ out everywhere. It’s insane. But I need to really focus on fixing that this week, or I’ll totally derail by Friday, at which time we are under the two-week window.

I could really use some Spock right now, though, to clear the cluttered dresser drawers. Or maybe I should take the advice that Shickeneder gave his friend Mozart: Write it down, Wolfie. It’s no use to anyone in your head.

Is it Monday? Of course it is. Ick.

PS — did anyone get the notification email yesterday that a new post had been published? I CCd it to myself and never got it…