“They took the job I loved most. I just wanted to be a cop, and they took it away from me.”

Reading the Times yesterday, I had a “whoa, I remember that movie” moment. Sad story, too. It surprised me to learn that Frank Serpico — a zealous New York cop who blew the whistle on his corrupt colleagues back in the 70s — is now living in a cabin a hundred miles from the city. (Read the article while it’s still free — it won’t be for long.) It’s the basic disillusioned good cop story, but with tons more angst and righteous indignation. Frank Serpico was what the Times review called an “anti-cop cop.” He refused even the slightest insinuation of a kickback or bribe; he wouldn’t even accept a free meal out on the beat. 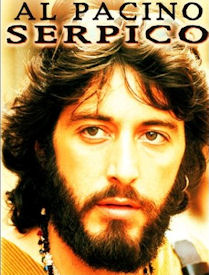 When he discovered that his fellow police officers were on the take, he was outraged. He tried to alert his superiors on several occasions, but the writing was on the wall: NYC cops don’t squeal — they just take the deal. When Serpico was shot in the face during a drug bust in Brooklyn in 1971, his fellow officers wouldn’t even call for an ambulance. He was taken to the hospital — bleeding profusely from his wound — in a squad car. Brutal.

While recuperating, he received cards from his colleagues, telling him to rot in hell.

I remember seeing the movie Serpico with Al Pacino (yaaay) in the late 70s. It was his first starring role, and he won a Golden Globe for it. I must watch it again soon, and I highly recommend it to you.

I just wish the real story was as satisfying. But hey…he appears to be happy, so it’s good. Living in a one-room cabin in the middle of the woods seems to suit him well. But he still carries a lot of pain (see opening line). His recollections are still, after almost 40 years, laced with bitterness and anger.

I say you should watch it sometime, if for no other reason than Al Pacino is dreamy.

Now, since my phone did not ring this morning, telling me I don’t need to drive into school in the snow, it is time to hit the shower and the frozen tundra.